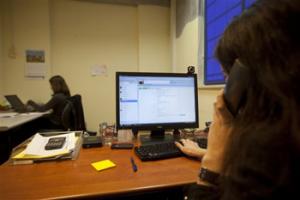 In this file photo taken Dec. 16, 2010, Israeli project manager Gali Kahane sits in front of a computer in the office of Comply, an Israeli start-up that employs Palestinians, in Hod Hasharon, near Tel Aviv. Israel’s flourishing tech industry, where major global companies have offices and startups abound, has earned the country the nickname "Startup Nation." Photo Credit: The Associated Press, File, Oded Bality.

Israeli and Arab tech partnerships, while in their infancy, may have some long-term promise to improve relations at least in the business sector between the two countries.

Ibrahim Sana worked for a global tech company, then broke off to start his own venture. Last year, he was crowned one of Israel's seven most promising young entrepreneurs by a financial newspaper. Sana's story isn't typical - he is one of only a few hundred Arabs who have broken into Israel's booming tech sector, a source of national pride from which the minority has been largely sidelined.

Now, there is growing awareness among Israeli entrepreneurs and the government that excluding such human capital from a booming industry can have detrimental effects not only on Arabs but also on Israel's economy. Efforts are underway to promote their inclusion. "These people are a quality workforce," said Sana, 33, who also works to bolster the inclusion of Bedouin Arabs in the tech sector. "They should be capitalized on."

But estimates put the number of Arabs in the industry at some 1,600, a jump from 350 workers in 2008 but still only about 2 percent of all Israeli tech workers. Arabs make up some 20 percent of Israel's population of more than 8 million.

Despite its strong economic indicators, Israel has long been warned that it must reduce poverty among its Arab citizens, as well as among other vulnerable populations such as ultra-Orthodox Jews, to maintain growth. Advocates see promoting Arab inclusion in high tech as a way to ensure that.

Activists and entrepreneurs have blamed the exclusion of Arabs on a number of factors. They say Arabs who study science in Israeli universities or colleges typically go on to work in medicine or pharmacology, professions that are traditionally considered more respectable in their culture. Many Israeli entrepreneurs come from elite military units where they have been given cutting edge technological training and most Arabs don't serve in the military. 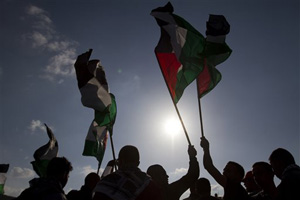 Geography has also played a part. Israel's high-tech heart is in Tel Aviv and surrounding cities, far from the centers of Arab population in the south and north. Arabs who study science tend to return to their home villages to be close to their families, often taking up poor-paying jobs as teachers, rather than work in the Tel Aviv area. But structural problems in Israeli society have also figured into the equation.

Israeli Arabs have long contended that, despite their citizenship, they are victims of official discrimination, with their communities receiving fewer resources than Jewish towns. While some Arabs have made strides in recent years in entering the Israeli mainstream, they are on average poorer and are slightly underrepresented among Israelis with higher education. In an attempt to break through those barriers, a number of organizations have sprouted, aiming to increase the rate of Arabs in high tech.

Ma'antech, a conglomeration of 42 tech companies backed by Israeli President Shimon Peres, has pledged to employ more Arabs. The group offers training to employers unused to working with Arabs and potential candidates unfamiliar with the ins and outs of a hiring process.

Gai Hetzroni, who heads Ma'antech and is a corporate affairs manager for Cisco Systems, said the initiative has brought some 800 Arabs into the industry since 2011. Hetzroni said Ma'antech's efforts serve as an example for other industries in Israel. "We are showing other sectors what can be done and what the potential of this population is," he said.

The government says it has recognized the importance of including Arabs into one of Israel's leading industries.

Aiman Saif, who is responsible for the economic development of minority groups in the office of Israeli Prime Minister Benjamin Netanyahu, said the government is luring tech companies to Arab towns with tax breaks and subsidies. It has also set aside funds for scholarships for Arab students enrolling in sciences and a government-backed investment fund has been created to support Arab entrepreneurs.

But more needs to be done to boost numbers, he said. "Integrating the Arab society is a national mission," said Saif. "We are in the right direction but we have a lot more to do."

Still, critics accuse the government of talking more than acting. Sami Saadi, a co-founder of Tzofen, which also aims to foster Arab participation in the tech sector, said that integrating more Arabs would not only help secure Israel's economy but also further equality between Arabs and Jews.

"The government at the end of the day will understand that it's a national interest, not just an interest of the Arab society," said Saadi. "It must be responsible for promoting this."