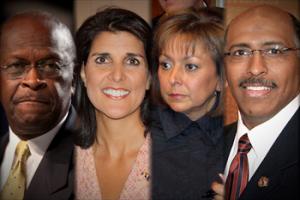 The Republican Party struggles in recruiting blacks and Hispanics as it tries to redefine itself as being more inclusive and representative of a broader segment of America.

The Republican Party's image has changed little in the year since GOP Chairman Reince Priebus published his prescription for broadening the party's appeal despite its investment in outreach to the racial minorities, women and gay voters who backed Democrats decisively in 2012. "The issue that remains an open book for the Republicans is: What is the character of the party?" said Ari Fleischer, a top aide to President George W. Bush, who helped author the report of the "Growth and Opportunity Project. "Are we a more inclusive and welcoming party yet?"

As the Republican National Committee opens its winter meetings Washington, D.C. on Wednesday, the party is counting on the political geography and expected lower turnout of the 2014 midterm elections to give them control of the Senate. If that happens, Fleischer said, it would be a "false narcotic" for the larger problems facing a party that has lost the national popular vote in five of the last six presidential elections. Those will take years to fix.

In the past year, Priebus has launched new efforts to reach out to racial and ethnic minorities, hired about 170 state-level staff - with more planned - and invested in technology to better track potential voters, a tactic Republicans pioneered and Democrats have perfected over the past eight years. He also renewed efforts to win over Hispanics nationally with voter outreach staffers. 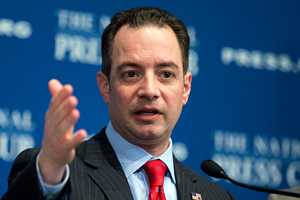 But these structural changes can end the GOP's White House losing streak only if its messengers fulfill the report's larger goal: "Change course, modernize the party and learn once again how to appeal to more people."

Since losing the 2012 presidential election, Republicans have continued to slip in public approval. According to a recent Gallup poll, 32 percent have a favorable opinion of the GOP now, compared with 43 percent immediately after President Barack Obama's re-election. Democrats were viewed favorably by 42 percent, also down from a year ago.

Nationally, Obama carried 71 percent of the Hispanic vote, according to exit polls conducted for The Associated Press and television networks. In New York, it was 89 percent. In Florida, 60 percent. "This is a long-term effort," said Izzy Santa, director of Hispanic communications for the RNC. "We're making sure that we're talking to them, that we're listening to them and that we understand their concerns."

Yet, the Priebus report's only policy recommendation - an explicit call for comprehensive immigration reform - has been stalled by infighting in the GOP-controlled House. While Speaker John Boehner has promised to begin drafting key principles for such legislation, conservatives have vowed to block it. "It would be a colossal mistake for us to take up anything that just ends up changing the subject" from the 2010 health care law now in effect, said Rep. Steve King, R-Iowa. 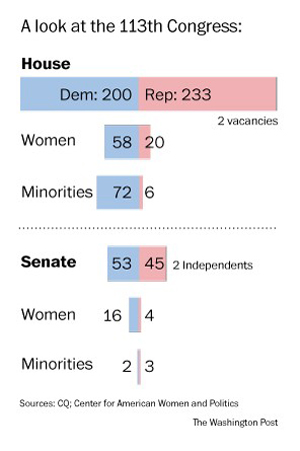 RNC officials say their outreach is limited to changing party structure, since they have no control over legislation. "I have to focus on the things that I most control," Priebus said in a recent conference call with reporters. "The fact is, what I most control are things like the mechanics." The RNC has replicated its Hispanic outreach to court African Americans, Asian Americans and other demographic groups, hiring dozens of staff in Washington and in key states. Priebus personally has reached out to national black and Hispanic leaders.

Republicans also are deploying women as candidate organizers around the country, hoping to win back female voters who were turned off in 2012 when GOP Senate candidates in Missouri and Indiana crippled their campaigns by making contentious comments to explain their opposition to abortion in cases of rape. RNC officials said those were isolated cases where the candidates' words, not the GOP's long-standing opposition to abortion, cost them.

This year, Republican women who oppose abortion rights are running for Senate in several states and can carry the party's position more authentically, GOP spokeswoman Kirsten Kukowski said. "Women candidates need to be our voices," she said. "There is a lot going on behind the scenes to arm our candidates and messengers."

The National Republican Senatorial Committee, for example, is prescribing training for candidates that includes suggestions on how to address touchy topics. "We're going to continue to be the conservative party," said RNC member Henry Barbour of Mississippi, who helped write the Priebus report. "But you can do that in a way that's not divisive."