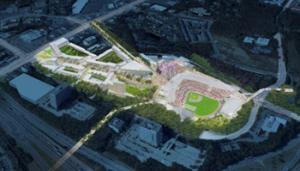 The Atlanta Braves move from downtown Atlanta is a reflection of going to greener pastures because of race, racial inequities and the economic issues that result because of them. For the Braves, abandoning downtown Atlanta for the suburbs means moving closer to the Major League Baseball team's fan base and developing money-making restaurants and amenities. Team officials say it's simply good business.

But the decision also highlights long-standing disparities over wealth, where people live and transportation – all facets of life connected to race and social class in Atlanta. The Braves will be moving from an area that's predominantly black and relatively poor compared to whiter Cobb County – where the team says more ticket-buyers live. Although it is long past segregation, the hometown of slain civil rights leader Martin Luther King Jr. is far from integrated, and the city's politics, business and even sports teams reflect that gap.

Consider what Rick Grimes views from his home mere blocks from Turner Field each time there's a game: Fans, mostly white, streaming past. "I would say the large majority of people who support the Braves are white folks," said Grimes, who is African-American.

While no one would reasonably accuse the Braves of making a decision based on race or class, one scholar says major attractions often migrate toward money. "It becomes a class issue in a lot of ways," said Larry Keating, a Georgia Tech professor emeritus who has studied Atlanta's development. "A lot of the primo stuff that is highly valued by the society ends up going where the wealthiest areas are."

Team officials say they were looking at other factors. When Atlanta did not negotiate terms acceptable to the Braves, the team found a suburban government willing to pay for a chunk of the proposed stadium. The Braves will also own the property around the stadium, meaning it can develop restaurants and stores within walking distance. There are few amenities around Turner Field. Team officials say the new site would offer better transportation access considering the majority of fans come from north of the city.

Like many U.S. cities, metro Atlanta has an urban core that includes a large population of black residents and suburbs that are typically whiter. Atlanta famously marketed itself as "The City Too Busy To Hate" as other Southern cities resisted integration. But the city has long-standing racial divisions. 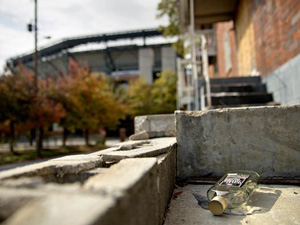 Once owned by media mogul Ted Turner, the Braves grew a national fan base as their games were carried on cable systems around the country on one of Turner's TV stations. To support its argument for leaving, the Braves released a map based on ticket sales data that showed its fans were clustered in an arc north of downtown Atlanta that ran through the suburbs.

That information also shows fans tended to purchase single-game tickets at the highest rates in communities that were several times richer than neighborhoods closest to the stadium, and much whiter. Of the communities with the 10 highest sales rates, all but one were north of the current stadium and had median household incomes ranging from roughly $61,000 to $100,000. Those communities ranged from 58 to 85 percent white, according to counts by the U.S. Census Bureau.

For this analysis, The Associated Press examined last year's ticket sales by zip code as tallied by the Braves and compared it with Census counts and estimates showing the population of adults in those areas along with race and income. The analysis ignored zip codes with less than 10,000 people and those more than 100 miles from the current stadium. The comparisons are imperfect. The zip code areas used by the Census do not perfectly align with postal zip codes. The sales figures do not include season ticket purchases, people who pay in cash or customers who refuse to supply their addresses. Braves officials think the sample likely undercounts suburban fans since at least some suburban commuters presumably buy tickets using Atlanta work addresses.

In contrast to the Braves, the NFL's Atlanta Falcons decided to remain downtown after Atlanta agreed to contribute $200 million in tax money toward a $1 billion new stadium.

Some see class, not race, as the more relevant divide. C.J. Stewart, who coaches Braves star Jason Heyward in batting, sees poverty as a deterrent to ticket sales. He runs a charity that uses baseball to teach students, many poor and from the city, about life. Stewart's coaching business is independent of the Braves. "It's hard to go to a Braves game when you're hoping and praying that your child graduates from high school," he said.

Some suburban fans acknowledge the panhandling, barred windows and vacant lots in the area around Turner Field make them wary. The proposed stadium is near an exhibition center and a mall anchored by giant stores Costco and Sears.

"What I don't like about the games, to be quite frank, is the security aspect," said Rocco Lionetti, who works with his brother at a suburban Cobb garage. "When you leave the stadium, you run to your car because you don't want to get mugged." Lionetti said his views are shaped by security concerns, not race, and he would attend more games if the stadium was near bars and restaurants.

One politician was criticized for invoking – whether intentionally or not – racial politics when discussing the stadium. The chairman of Cobb County Republicans, Joe Dendy, said in a written statement that he rejected calls for bringing rail transit to Cobb County. For years, much of the debate about transportation has been wrapped in racial politics. White communities surrounding Atlanta rejected the transit system in votes during the civil rights era. Surveys show the transit system's customers are roughly 74 percent black. Dendy declined an interview, but said in an email that his remark was not about race, but rather his opposition to a prior rail project that was rejected by voters.

Four generations of E. Lee Sullivan's family have lived in the Mechanicsville neighborhood near Turner Field. She said she understands the concerns of suburban fans, at least to a point. "You know, you can dress it up and say it diplomatically and say crime in the area, which really breaks down to 'I'm scared a black person is going to rob me,'" said Sullivan, who is black.

She acknowledged the neighborhood had a crime problem that she blamed on poverty, not race. Sullivan blames Turner Field and its massive parking lots for sapping the vitality of a commercial district that once included a theatre, a bakery and a library.

"They ruined all that, they wiped that all out," she said. "Now they're just kind of like, ok, we're going someplace else."