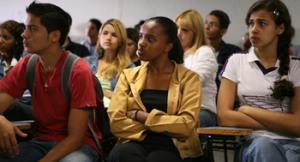 Two members of the U.N.'s working group on Afro-descendants said their 10-day fact-finding mission to five Brazilian cities underscored that the government has finally acknowledged the problem and has "shown its willingness to combat racism."

"Historical injustices continue profoundly affecting the lives of millions of Afro-Brazilians and are present throughout all levels of Brazilian society," panel member Mireille Fanon-Mendes-France told journalists at a news conference in Rio de Janeiro.

Brazil received more African slaves than any other country in the Americas and was the last major nation to abolish slavery, and people of color here still tend to languish at the bottom of the social pyramid.

"To overcome the legacy of colonialism and slavery, the challenges Brazil faces are enormous," Fanon said. "Afro-Brazilians represent more than half of the Brazilian population, however they're sub-represented and invisible in most positions of power, in the media and the private sector."

She added that blacks continued to face hurdles in accessing quality education, the courts, health care, basic sanitation and other state services.

"Although Brazil has progressed in reducing poverty . we note that there's still a great contrast between the situation of black Brazilians and the country's rapid economic growth," Fanon said, reading from a report with the group's initial conclusions.

She praised a series of recent government measures aimed at stamping out the lasting legacy of slavery, including affirmative action in universities.

The group will report its findings to the Brazilian government next year, with a series of non-binding recommendations.