The Rising Use of Money Cards 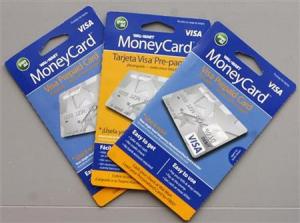 Use of money cards is on the rise. Money cards can be defined as any type of card that has a store value programmed into it. These cards can be divided into two categories: closed-loop cards having a one-time limit like merchant gift cards; or pre-paid phone cards or cards that can be reloaded. Photo Credit: vanessasmoney.com

The use of money cards is on the rise, and they come in all forms from gift or store-value cards to pre-paid cards to access various products and services.

Last year alone, Americans spent $483 billion using store-valued cards. While there is nothing wrong with store valued cards necessarily, it is also projected that this year $52.4 million will be lost on these cards according to a recent article in Time Magazine – all lost through non-use or the cards being either lost or expired.

Money cards can be defined as any type of card that has a store value programmed into it and, taking that a step further, these cards can be divided into two categories; closed-loop cards having a one-time limit like merchant gift cards or pre-paid phone cards or cards that can be reloaded.

While use of money cards is widespread across socio-economic status, they are often used by minorities and the poor to access mobile phones and to purchase other needs that would normally be purchased using a checking account or other types of credit cards.

It is also important to point out that currently no law is in place for issuers to offer refunds for lost or stolen cards and the closed system cards can't be used for cash so that means when a cardholder uses all the money on a card, but say $1 or $2 then that $1 is lost. Think of how many dollars these companies are getting back overall.

In the United States reports indicate that drug traffickers are even using these cards at a higher rate than normal to move drugs across the border and currently, it is legal to cross borders without having to report how much money is stored on these cards. This, as opposed to having to report high amounts of cash being taken across international lines.

The Federal Reserve Bank of New York noted that stored value cards are one of the most dynamic and fastest growing products in the financial industry.

"Anyone who makes purchases with a merchant gift card, places phone calls with a prepaid telephone card, or buys goods or services with a prepaid debit card is using a stored value card," the website notes adding that "certain types of these cards are being heavily marketed to lower-income consumers, especially the unbanked or underbanked."

They also note that the stored value card market is growing and evolving rapidly. "According to industry estimates, more than 2,000 stored value programs are available, with roughly 7 million Visa- or MasterCard-branded stored value cards in the marketplace. There are approximately 20 million users."

Reloadable multipurpose cards are often viewed as alternatives to checking accounts for those in the lower income bracket be it minorities or any lower income group.

Clark Howard says that under federal law you do not have the same protections with a debit card as you do with a credit card. For example, if you book a cruise or buy a plane ticket with a credit and the carrier later goes out of business, you can do a chargeback and get your money back. Not so with a debit card.

So, while store bought credit cards might be attractive to give as gifts for the holidays or birthdays, next time you opt for that gift instead of something more tangible remember you might just be giving the store in which you bought the card the biggest gift of all since at some point these stores are banking on the fact that the card will be lost, expired or simply go unused.