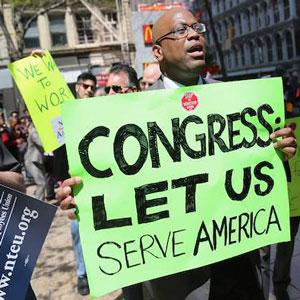 Protestors from around the country marched to the Department of Justice in June demanding a meeting with Eric Holder and a commitment that the DOJ will go after the banks in both criminal and civil court actions. Photo Credit: http://kathmanduk2.wordpress.com

Nearly 8,000 Americans have been jailed participating in big-bank related protests aimed at garnering reforms along Wall Street, while no executive from any of the banks once deemed “too big too fail" has so much as undergone a stern cross-examination for all the widespread Bush-Recession-era fraud perpetuated by those institutions. These banks committed fraud against large numbers of minorities, but also against people of all colors and ethnicities.

It’s all made for a new mantra for Occupy protestors, many of whom have irascibly adopted reform-minded Democratic Sen. Elizabeth Warren’s rallying-cry asserting that same sector has now grown into the mindset they’re even “too big for trial.

According to Occupy Arrests, as of May 2013, some 7,736 protestors have now been arrested on varying charges and hundreds of thousands of others handcuffed by a system of greed and inequality that’s led to record home foreclosures and a shrinking middle-class that now pulsates as virtually non-existent.

Just a few weeks ago, chagrined homeowners took to the streets of the Nation’s Capital, demanding that the Department of Justice finally take action against those institutions in the form of criminal prosecutions for the most egregious and civil restitution for the countless numbers of people impacted.

Marchers came from as far away as Portland, Oregon and from such heavily foreclosed affected cities as New York and Atlanta, all with a common and unifying cause.

“We’re really excited because over the last two and a half days, we’ve had residents from around the country who’ve lost their homes, or who are fighting to save their homes, come together to commit to training for change, to bring the movement back to their community, to keep fighting for their homes, and also to risk arrest today, as we march to the DOJ and refuse to leave until we get a meeting with Eric Holder, until we get a commitment that he’s going to start going after banks,” said Tim Franzen, who works for the Quaker social justice group American Friends Service Committee.”

Franzen later stressed, “it’s not just about jailing bankers, it’s about bringing resources back into our communities. Wealth that has been stolen. Trillions of dollars of wealth has been stolen from our neighborhoods and you can just drive through them and see the consequences. The boarded up homes; people on the street. We are not on a crisis of economic resources, it’s one of priorities. And that’s what we’re here to say.” 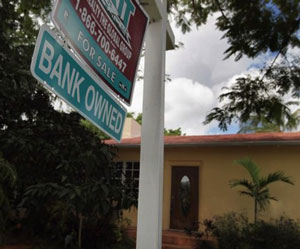 All that day, scores of protestors marched on the steps of DOJ offices, where waiting officers armed with pepper guns, batons, and various other crowd control type weapons greeted them. Vocal but controlled protestors offered little other resistance, as overzealous officers sought to push them back and even handcuffed several of them.

One-time homeowners who have now lost the homes they toiled to keep most of their adult lives amid all the carnage, instantly began setting up tents reading: "Foreclose on Banks.”

The message was clear, and not even the looming threat of a jail cell and a little discomfort was enough to stop the will of the people.