Speaking to Michigan business and government leaders on this Lake Huron resort island, Bush said the "right to rise" socially and economically is part of the fabric of American citizenship, but has become frayed as too few students leave high school ready for college or a career.

"We're not rising to the challenge," he said. "It is shameful. The greatest country on Earth has allowed this to happen."

Bush, who served as Florida’s governor from 1999-2007, called for more rigorous standards, expanded school choice, and greater use of technology in the classroom to better prepare students for jobs that went unfilled even as the unemployment rate soared during the economic downturn.

Responding to criticism that Republicans have harmed public schools by cutting funding, he said U.S. educational quality has lagged even as the nation spends more per student than any other.

"What's important is where it's spent, where is the focus," he told reporters after his speech during the Detroit Regional Chamber's annual Mackinac Policy Conference. "Are you funding the beast, or are you funding classroom education? Are you funding your priorities as it relates to childhood education, or are you just sending money down without any reform at all? The only thing that matters is student achievement."

Bush praised the education policies of Michigan Gov. Rick Snyder, who said during the conference he would emphasize early childhood schooling and career technical training over the next two years.

After years of bickering, a Senate committee recently approved an immigration overhaul bill with support from both parties. It calls for new border controls, and enforcement mechanisms in the workplace would allow tens of thousands of workers into the country legally for high- and low-skilled jobs, and create a 13-year path to citizenship for the 11 million people already here illegally. Floor debate is expected in June. 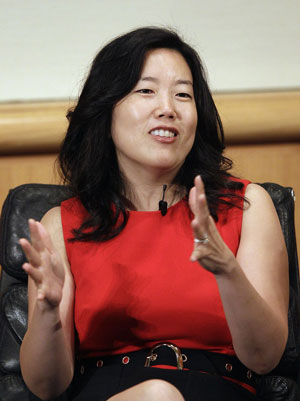 But the measure has drawn sharp criticism from conservative House Republicans who contend it does too little to deal with illegal immigration.

Bush described immigrants as "the adrenaline to our economic system" and said they are essential for growth at a time when U.S. birth rates are stagnating. He acknowledged a need for better border controls but said many people who are in the country illegally first came with legal visas and overstayed them.

"It's not the American way to keep people in the shadows," he said.

Many immigrants - particularly Asian-Americans - would seem to be natural Republican voters, Bush said. They exceed the national average in categories such as income, college graduation, and business startups. But 75 percent supported President Barack Obama in the 2012 election. Some have the impression that Republicans don't want them, he said.

"If you're sending a signal that we want your vote but you really can't join our club ... it's not the right way to win," Bush said.

Carlos Gutierrez, who served as U.S. commerce secretary under George W. Bush, praised the Senate bill in a speech at the conference and said immigrants are good for the economy.