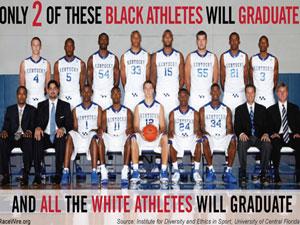 Kentucky — #2 ranked team in the NCAA Division I basketball tournament, but the graduation rates for Black basketball student-athletes is 18 percent compared to 100 percent for white student-athletes, according to the Institute for Diversity and Ethics in Sport, University of Central Florida. Photo Credit: racewire.org

Sports’ is the ticket to a college education for many black students. But that relationship between the “sport culture” and academics often leads to lowered academic performance and a failure to complete a degree, according to research from Kansas State University.

"Some scholars characterize the black student athletic experience as being very unique," said Albert Bimper Jr., assistant professor of special education, counseling, and student affairs at Kansas State University. "In Division I athletics, black student athletes make up 61 percent of the basketball player base and 46 percent of the football player base. Yet they represent a very small portion of the overall student population and have a lower graduation rate than nonblack athletes."

Bimper, a former college and pro athlete, wanted to understand how the college experiences of black student athletes can be enhanced to increase graduation rates.

Bimper interviewed these black athletes at various Midwest universities about their academic experiences and analyzed their responses using “critical race theory,” a technique that combines race, law, and power in examining socio-cultural influences, to understand why the students fell short in academic performance.

Bimper found students believed that while their sports accomplishments was celebrated, their classroom performance was not, skewing their sense of priorities. Some students said outside pressure limited their options for an academic major, or not understanding what disciplines were available to them. Others reported enrolling in a certain major because of advertisements they saw at sporting events or because it was a degree path that an athlete they admired studied.

Worse, many felt they experienced lower academic expectations because they were athletes and black.

"There are beliefs and perspectives that student athletes are 'dumb jocks,' and that burden is greater for black student athletes," Bimper said. "But what does it mean to be a dumb jock? Based on the data, we could say that dumb jocks are not born, rather they are being systematically created and institutionalized by the culture of sport.”

Sports bring in big bucks for universities, which leads them to recruit athletes for their sports ability above their academics. Bimper adds that of the 70 college teams competing in the 2012 bowl games, 51 percent had at least a 20-percentage point difference between the graduation rate of black student athletes and white student athletes. And a quarter of those teams had a 30 percent difference in graduation rates.

One good sign is the NCAA Division I Men’s' Basketball Tournament Teams. The overall graduation rates of NCAA players this year improved, particularly among black athletes, according to the annual report by the University of Central Florida’s Institute for Diversity and Ethics in Sports. The overall graduation rates increased from 67 percent in 2012 to 70 percent, but among athletes of color the graduation success rate increased from 59 percent to 65 percent.

The goal, however, should be to not only graduate, but to educate student athletes, Bimper said.