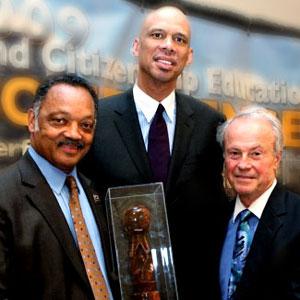 The Reverend Jesse Jackson honored Richard Lapchick, director of the DeVos Sport Business Management Program, and author of the annual report on diversity and ethics in sports, with a lifetime achievement award for his work in civil rights. Kareem Abdul-Jabbar presented Lapchick with the award at a special awards banquet during the Rainbow Push Coalition and Citizenship Education Fund’s 38th Annual Conference in Chicago. Photo Credit: today.ucf.edu

NEW YORK (AP) - While Major League Baseball teams improved racial diversity in hiring senior administrators, the employment of women is still lagging, according to the annual report by Richard Lapchick's Institute for Diversity and Ethics in Sports at the University of Central Florida.

"The most notable trends are that (at) a team level there was substantial improvement, and that hasn't been the case over the years," Lapchick said. "It's still significantly behind the major league offices in terms of percentages of people of color, but we thought that was a really positive trend."

MLB's central offices have 30.8 percent people of color. The sport's overall score of 92.5 points equaled its top mark in 2010, and racial hiring received an A grade for the fifth straight year. Gender hiring remained a C+, with its points increasing from 75.2 to 76.6.

Gender hiring improved from a D to a C among senior team administration, but it remained an F among team vice presidents.

"What baseball tells me, and I'm sure there's probably some truth to it, is that there's such a small turnover at the team level in particular that you can't see a lot of change quickly," Lapchick said. 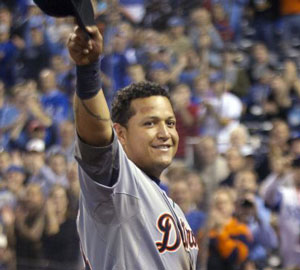 Lapchick began conducting his study in 1988, and said changes among players were within yearly fluctuations. African-American players on opening-day rosters dropped to 8.3 percent this year from 8.9 percent last season, and the percentage of Latino players rose from 27.5 to 28.2.

GMs increased by one to four, but Lapchick included San Francisco's David Martinez, whose title is general manager retail. But no women or people of color are the controlling owners or CEOs.

"Major League Baseball has made important strides in instilling overall diversity throughout our industry, and today's findings illustrate the depth of those efforts," Commissioner Bud Selig said. "We recognize, however, that there is more to accomplish and improve upon."