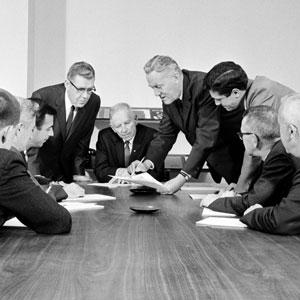 Although percentages continue to rise slowly, the actual number of all women, including minority women on the corporate board is not growing fast enough for many. Unfortunately, it still looks like the “good ole boy” network in too many boardrooms around the country. Photo Credit: businessweek.com

“Based on data for almost 6,000 companies in 45 countries, and including historical data, the survey provides a broad and detailed assessment of global progress on gender diversity among corporate directors. The survey finds extremely slow progress in most of the world outside Europe, which has led on this issue through the adoption of legal mandates for the representation of women on corporate boards. The findings will be of particular interest to investors and others seeking to increase board diversity through non-legislative means in North America and elsewhere.”

Though the GMI report did not separate out women of color, the March 2013 Calvert report, “A Survey of Corporate Diversity Practices of the S&P 100” looked at the top S&P 100 companies and found that “while there are 98 companies with women directors, and 86 companies with minority directors, only 37 companies in the S&P 100, include minority women on their board.”

But the Calvert report also notes, “In the S&P 100, 39 companies do not disclose any employee demographic data publicly, leaving consumers and investors unable to determine the effectiveness of corporate diversity initiatives. Over half (54) of S&P 100 companies disclose some level of EEO-1 data, such as the percentage of women employees or number of new minority hires.”

Meanwhile, Pennsylvania State Treasurer Rob McCord continued his call for greater gender diversity on corporate boards after the release of the GMI Ratings.

"A more diverse board composition leads to more ideas and fresh thinking, and it forces people to consider alternative viewpoints and challenge the status quo. All of this can lead to better oversight and better returns for shareholders," McCord said in a statement.

McCord’s statement is backed up by an August 2012 Credit Suisse study which measured the performance of 2,400 companies and found those with at least $10 billion in market capitalization and at least one female board director outperformed companies with no women directors in share price performance by 26 percent between 2005 and 2011. Smaller companies with female board directors outperformed the male-only companies by 17 percent.

As Germany prepares to mandate quotas for female participation on major corporate boards, the U. S. is still feeling the pressure to improve board diversity, says Hillary A. Sale, a corporate governance expert and professor of law at Washington University School of Law.

“There are a lot of studies out there showing that diverse groups perform better, and there’s no reason to think that isn’t also true in the boardroom. I’ve certainly heard directors say it. I’ve also heard CEOs say it,” said Sale.