Sequester Will Result in Job Loss 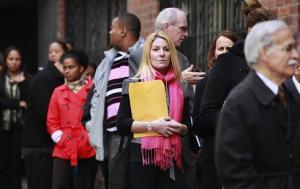 The sequester will result in job loss across, race, age, location, and socio-economic status.

Up to 2.14 million American jobs could be lost if the sequester proceeds uninterrupted by Congressional intervention. According to a recent economic impact report detailed at SecondtoNone.com 48,059 jobs in healthcare, 98,953 in construction, 473,250 in manufacturing and 617,449 federal jobs are at risk with California, Virginia and Texas taking the biggest hits in terms of job loss.

U. S. News takes the analysis a step further and looks at the top ten industries that will feel the job losses most acutely. Defense contractors, public schools and colleges, road construction, environmental clean-up, airports, social service facilities, public transportation, steel framing industries, and gun and ammunition dealers are set to feel the pinch the most.

The Fiscal Times has accused Transportation Secretary Ray LaHood and Homeland Security Secretary Janet Napolitano of enlisting “scare tactics” regarding impending job cuts from their departments citing comments each secretary made of over the past week that indicate that our country will be less secure due to homeland security staffing cuts and the layoff of hundreds of air traffic controllers and TSA agents. Scary or not, the fact is that the loss of jobs in these government sectors will most certainly result in decreased safety and security for Americans.

A ripple effect might also ensue with more jobs losses being realized as the secondary impact of sequester is felt. For example, if the FDA experiences layoffs of meat inspectors and drug approval personnel this could lead to layoffs at meat packing plants and pharmaceutical companies. A chilling report by the Congressional Research Service explains how cutting the government labor force has both a direct and an indirect effect on the job market. Cuts will spiral down from government job losses to severely impact all private sector industries that supply the government with goods and services. In short, we may as well kiss our current economic gains goodbye as the sequester settles in.

Interesting article, I'm curious, other than the obvious decline of the economy, is there a reason why these specific jobs are taking cuts? What exactly is happening with Homeland security? It's almost like they are intentionally cutting programs that pander tot he safety of Americans, like Homeland security and now food inspection.

I take this story very personal and the recent news coverage of the sequester. Monday morning I woke up to a news caster and guest saying the sequester isn't real, nothing bad is happening yet, planes are on time and there are no zombies. This was particularly disturbing because I am a civilian government employee who will be furloughed in the next month or so. The money that won't be in my check is real, the cuts in my lifestyle are real. I have lost all faith in the government, federal. Now my state is trying to pass some ridiculous gun laws which I have no vote for. This has been a tought few months listening to this stuff. I would hope the privileged politicians would open their eyes and do something!