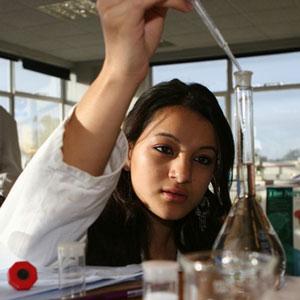 Hispanic minority women, and women of all races and ethnicities should seek out STEM related fields to ensure a better future for them and their families. Photo Credit: aast.wordpress.com

American high-tech companies are screaming for more highly skilled employees to fill vacancies that require training in science, technology, engineering, and mathematics (STEM) subjects. To fill this workforce gap, both tech companies and educators encourage interest in STEM subjects among K-12 students. What is so appealing for minority and female students is that once acquiring STEM skills, they won’t see the same pay discrepancies most ethnic groups traditionally experience.

“It’s one of the few remaining equal opportunity employers,” says Nicole Smith, a senior economist at Georgetown University’s Center on Education and the Workforce.

Smith says, earnings in STEM Degree professions show less of the traditional pay gap than other occupations between minorities and women on the one hand and white men on the other. A study released by Smith’s center last year, indicates that the demand for STEM talent is growing even faster outside of traditional, high-tech corporate STEM occupations.

“Women and minorities are in comparable average wages to white males,” says Smith. “In fact, STEM is the only field where Asian men are actually earning more than white males.” 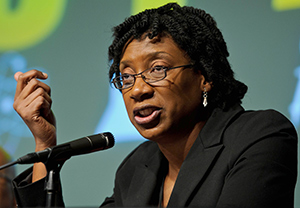 Helping qualified students with disadvantaged backgrounds obtain an increasingly expensive university degree is difficult enough. But getting them interested in science?

“Part of the issue is if you have icons and individuals that come to the school and motivate the students to sort of open their eyes to the possibility of somebody looking like you doing this and that it’s an option for you. That you don’t necessarily have to follow in the footsteps of other trends, especially where there’s a cycle of poverty, you can step outside that,” says Smith

It helps when the President of the United States has been touting science. During both his 2011 and 2012 State of the Union address, President Barack Obama said he wanted to train 100,000 science and math teachers over the next 10 years.

“Growing industries in science and technology have twice as many openings as we have workers who can do the job. Think about that — openings at a time when millions of Americans are looking for work,” the President noted.

Then on Tuesday, February 7, 2012, President Obama hosted student science fair winners from around the country at the White House and used the chance to announce a new goal: "One million more American graduates in science, technology, engineering, and math over the next 10 years." 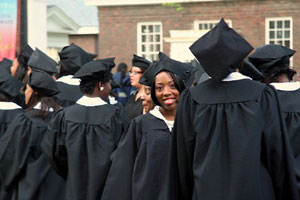 STEM supporters understand how providing learning opportunities for all youth can increase their future options. But getting kids excited about a career in science means going to college and that means dealing with rising tuition costs.

Many high-tech companies established scholarship programs to nudge students into STEM Degrees to assure an educated workforce and some of these companies focus on students with limited economic assistance opportunities. One high profile firm is SanDisk, which announced in January 2012 a scholarship fund that awards up to $10,000 for students from disadvantaged backgrounds.

"Our hope is to alleviate the under-representation of women, Latinos, and African-American students in STEM-related occupations,” said Sanjay Mehrotra, president and CEO of SanDisk in announcing the program.

One in five students in the U.S. is Hispanic, including 12.4 million enrolled in K-12 schools, according to the Hispanic Scholarship Fund. When President Obama won the Nobel Prize in 2009, he donated his $1.4 million winnings to 10 different charities. One of those was the Hispanic Scholarship Fund, which created a $5,000 fund for Hispanic students pursuing STEM-related fields. In October 2011, the organization announced 12 more winners of the award, all of whom are college juniors in STEM-related fields. 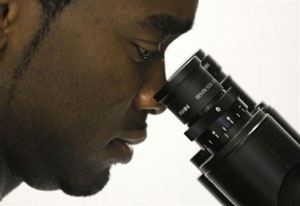 STEM education is designed to improve the nation's technology industry competitiveness and give students a shot at good paying careers that won’t be going away anytime soon. But Smith says she’s worked in both K-12 and as a University professor and has noticed that whenever you bring up the issues of money and degrees, teachers get nervous.

“It’s much more than being nervous, it is also where they get to the point where they want to tell you ‘look, I’m training young minds and I’m creating good citizens,’” says Smith. ‘So, when we talk about money and wages, teachers themselves are very reluctant to say that you should or shouldn’t pursue a particular field of study because of the potential earning opportunity – they really don’t like talking about it.”

Still, if the promised rewards from STEM Degrees – and the available financial aid - can get at least one college degree into more minority households, it plants the seed that applying for financial aid and on to college is not a goal so far out of reach.