A Lack Of Work Challenges The Stereotypes Of Welfare 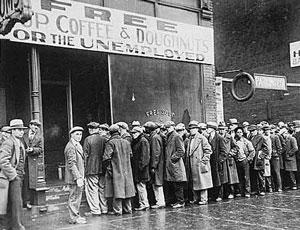 People receiving financial support from the government today come from all races and ethnicites.

The stigma of welfare is a debilitating, empty experience where those in need of public assistance are left feeling like obtrusive, less than human, ill-equipped people. In a 2005 study, Eugenie Hildebrandt and Sheryl T. Kelber uncovered that 53 percent of women in work-based welfare programs felt sad and discouraged, 64 percent felt downhearted and blue, and over half of the subjects said they experienced depression while on welfare programs.

The stereotypical view of welfare recipients presents them as lazy minorities unwilling to contribute to society, a drain on resources, and undeserving of living off the hard work of others. According to Christopher M. Federico from the University of Minnesota, the perception of whites towards African-Americans studied by political psychologists indicated that white views of African-Americans as undependable, demanding, and lazy were also subliminally directed to welfare programs. The public was encouraged to oppose welfare by equating their stereotypical beliefs of blacks to welfare programs — wrongly concluding that the programs were only for African Americans who wanted to live off the government.

Although those on welfare represent the lowest status class in American society, they are not all minorities, in particular African-Americans; they are people from all ethnic and racial backgrounds who for whatever reason find themselves bringing in a significantly lower annual salary than the so-called “middle-class.” In many instances, another stereotype falls into place for welfare recipients, and that is the collective viewpoint that all must be instigators of crime, addicts, and incapable of ever overcoming their current circumstances. Federico says politicians use negative racial perceptions too further isolate public sentiment toward welfare programs while the media reinforces the perceptions by displaying African-Americans in unsympathetic images that boosts the concepts of dependency, lawlessness, and violence.

This stereotype is now in question because the self-described hard-working families (through no fault of their own) are now experiencing what it means to depend on welfare programs. The economic downturn finds once thriving middle-class families now losing their coveted jobs, and the uncovering of a previously silenced issue. The once inherit racist undertones of welfare programs that Federico illustrates are being ignored as white, blacks — all Americans — find themselves reaching out for non-profit assistance from churches as well as food stamps, unemployment benefits, and other welfare programs. Today's welfare programs, now seen as they really are, which is additional funding to supplement work income, if in fact, the household receives any income.

As companies downsize and require more work from fewer employees, they devalue the efforts of all workers, and families struggling to make ends meet now realize that not all welfare recipients choose to be on the program because they do not want to work. The article “Helping the needy” says the current recession triggered an increase in welfare recipients since the welfare reform act of the 1990s.

The disillusionment with welfare programs led to major reforms in the 1990s, at a time when the national economy was strong. Harry J. Holzer’s article “Unemployment Insurance and Welfare Recipients: What Happens When the Recession Comes?” assesses that during this time the country experienced the lowest rates of unemployment in 30 years. This was the perfect decade to change welfare programs because the alterations affected just a few. People had jobs and did not need the additional support to put food on the table, pay bills, or subsidize housing costs.

As the modification of unemployment insurance transpired, it became more difficult to meet the requirements, and Temporary Assistance for Needy Families (TANF), replaced the safety net of cash-based assistance, with specific limitations on the benefits. During the 90s, the majority of people worked, and the stereotypical viewpoint of those on welfare was that they did not want to work. TANF set limits on the length of the funding, and the goal was to encourage everybody to find work, whether they wanted to or not. The TANF policy was based on the belief that work was uniformly accessible for all Americans, however, TANF failed to take into consideration the availability of jobs throughout the United States.

Holzer finds that the booming economy of the 1990s bolstered the belief that the new social welfare reform programs showed greater promise and success than many expected. However, what happens when jobs disappear? Prior to the current economic downturn, Holzer asked this same question in his 2000 article, “Nevertheless, several important questions about the success of welfare reform remain — and one of the most pressing is what will happen when the current national economic boom ends and the next recession begins.” The basis of Holzer’s question is whether the issue of unemployment is a much more intricate problem then people simply not wanting to work.

A steady increase of unemployment commenced throughout the first decade of the 21st century. The U.S. Census Bureau reports indicate that state unemployment insurance benefits rose from $20.5 billion in 2000 to $32.3 billion in 2007 (when the current economic downturn began). The proliferating economy of the 1990s was short-lived, and the scarcity of jobs has intensified over the past decade even with the changes in social welfare programs. This determination of people not wanting to work, as one of the underlying components of racism assessed by Federico, comes into serious question as more and more people of all races request help from unemployment, despite the timelines restricting how long their benefits last. And, with the most taxing years of the current recession still to be calculated, and unemployment hanging at over 9 percent, the pre-conceived notions of who and why people request welfare are becoming increasingly disputable.

Another belief dispelled by the U.S. Census Bureau data is the statistics illustrating who is living in poverty and as such, who is more likely to seek welfare assistance. The largest group of people living at or below the poverty level is whites at 42.5 percent, or 17 million. Blacks come in second at 25.8 percent, or 9.9 million, Hispanics living in poverty accounted for 25.3 percent, or 12.4 million, and the number of Asians living in poverty is 1.7 million. Almost one in seven Americans, 43.6 million, currently lives in poverty, which shows an increase for the third year in a row.

As a reassessment of how one becomes unemployed is currently underway with a new group of people previously unfamiliar with the inability of finding work, are now experiencing this unsettling phenomenon. They are discovering that lower classes are not the stereotypical minorities with little ambition to work. Their prior question of why people do not want to work, is now, finally, transforming into an understanding that it is not the people, but actually the lack of opportunities to supply the jobs necessary for everyone’s desire to better their lives.

Holzer, Harry J. “Unemployment Insurance and Welfare Recipients: What Happens When the Recession Comes?” The Urban Institute, Series A, No. A-46 (December 2000) http://www.urban.org/uploadedPDF/310032_anf_a46.pdf.