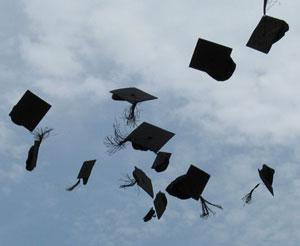 Graduates tossing their caps in the air to commemorate their final day in college.

For decades, American families heard that a college degree is the ticket to a middle-class lifestyle. However, today’s college graduates are facing the worst job market since World War II. Many graduates are coming out of school loaded with debt, and finding they cannot make enough money to pay back their loans.

Gig Harbor, Washington resident, Deborah W. Halasz, a graduate student struggling with the poor job market, says a bachelor’s degree is simply not, what is used to be. “Most definitely, having a college degree has lost its value,” she says. “I hold a master's degree and am currently pursuing my PhD. Yet, despite your previous experience and education, you still have to know somebody within the company who can vouch for you? I have been unemployed for over a year; so apparently, I don't know anyone in the businesses where I am applying!”

Craig Brandon, a former journalist and college professor, says attending college does not guarantee future professional success. Brandon, author of the book, “The Five Year Party,” warns about party schools that treat students more like hotel residents than pupils. “Party schools operate more like adolescent resorts than higher education institutions,” Brandon says. “Students are pampered with five-star residences and gourmet food courts, but education is strictly optional. Students get away with doing as little work as possible while still earning As and Bs. Half of the freshmen class drops out before graduation.”

Brandon argues that schools are failing at their basic function – to educate young people. “There is no question that college had been seriously dumbed down over the past decade. With 70 percent of high school graduates going to college, colleges are a mixture of the best and brightest along with the mediocre and below average,” he adds. “National surveys have found that college seniors are not able to compare opposing newspaper editorials or figure out if they have enough gas to get to the next filling station.”

Brandon also says that college can prove to be a huge financial set back for young people starting their careers. “The median figures are $23,000 in student loans and $3,000 in credit card loans. This takes them decades to repay and since most of these graduates are not getting the highly paid jobs those colleges promised, many alumni are making these payments out of their tips from jobs as waiters and taxi drivers. About 50 percent move back in with their parents, and 20 percent default on their loans, driving the costs up to over $100,000 and federal laws don't allow these loans to be forgiven, even if they declare bankruptcy.”

Cyrus Webb, a PR firm owner and radio show/television host from Mississippi, says that he has achieved professional success without a college education. 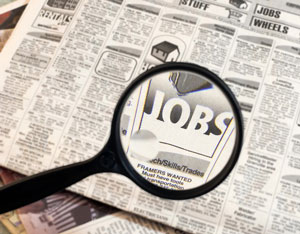 “I know firsthand what can be achieved with hard work without a college degree. At the age of 34, I have spent 10 years in hospitality, six of them in management positions (all the way up to general manager) without a college education,” Webb says. “I started my firm with just great networking and a genuine interest in helping people. It's interesting, but not one client I have represented over the past three years has ever asked for my education background.”

Webb believes passion and drive are the keys to professional success. “In the current economic situation, we just have to be genuine in our pursuit of what we want, regardless of our education level,” Webb says.

In today’s job market, many white-collar workers are turning to career colleges to learn practical skills that can find them work. Linda Smith, founder and president of Four-D College in San Bernardino, CA, is also seeing more college graduates attending trade school because they cannot find employment. Smith says that with many talented individuals looking for work, experience can often count for more than a degree. “I interviewed a young lady who had a master’s degree in accounting and couldn’t find a job,” she adds. “Employers are looking for people with experience.” She says trade schools are proving to be popular because they train students for a specific career. According to Smith, Four-D College placed 83 percent of its graduates in jobs last year.

Sarah Cullins, co-founder of Finesse Staffing in Rancho Cucamonga, CA, says a college degree is still important, but experience is what often gets people a job. She says sometimes having a college degree can actually work against you, especially when you are applying for an entry-level job. “The employers think that degree holders won’t stay in these positions.” Cullins has advised degree holders to omit their college references when applying for low-level positions.

Cullins adds that degrees from Ivy League universities, and reputable universities, can still give candidates an edge, and that if an employer were given a choice, he would always choose the graduate from the reputable school.