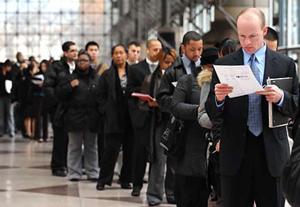 The Great Recession has not only reshaped the American workforce by sending millions of Americans home, but it has also reshaped the American family. The Great Recession has also been called the "Mancession," as men have been particularly hard hit in areas such as finance, real estate and construction. According to a 2009 report from the Center for American Progress, titled, "Weathering the Storm: Black Men in the Recession," four out of every five jobs lost were held by a male worker.

Massive layoffs in these sectors have left many minority families with the woman as the main breadwinner, and the man staying home, and taking care of the home.

With heated discussions between men and women already underway in many homes, these changes can elevate tensions in the African-American community. Recent statistics from the Department of Labor, state that while the national unemployment rate is 10 percent, the black unemployment rate is close to 17 percent. Black male unemployment may have a devastating effect on families that are already on shaky economic ground. The Center for American Progress report, states that when a black male breadwinner is laid off, it means the family is more vulnerable to sliding into poverty in communities already plagued by poor educational facilities, declining neighborhoods, and incarceration.

Jela Okpara, who wrote the book, "How to Deal With White People," under the pen name David Goldberg, says the corporate structure is generally not friendly towards people of color.

"Most people in Corporate America are white, and people tend to hire people who look like them," Okpara said. He added there is a reluctance from white men, who control Corporate America, to let outsiders into the boardroom.

Okpara says the conservative and formal environment of Corporate America is largely alien to African-Americans, and that might be why many of them do not thrive in that environment. Psychiatrist, Dr. Dwight A. Owens, Atlanta, GA, who specializes in African-American and Latino mental health issues, says that even well educated black men still face a stigma about their qualifications.

"We are perceived as lazy and uneducated in many circles," Owens said. "Even though I am a board-certified physician, I too experience the stigma of people thinking that I am less qualified as a physician, less educated as a psychiatrist, and not as trained as my white counterparts in the same discipline of medicine."

Owens said the economy has also pitted black and Latino men against each other. Latino men are seen as being willing to work for less and driving down wages. Okpara feels that people of color should stop asking Corporate America for jobs and look for alternative options, whether that's starting their own businesses, or looking for passive streams of income. He also added that people need to understand that while many black men may not have a job, many of them still have income. "If a brother can hustle, he may not have to go into the office," Okpara said. "

Owens is also in favor of more economic independence, and advocates for stronger entrepreneurial workshops teaching minorities how to create their own businesses. Owens also suggests the somewhat radical step of reducing unemployment benefits, which he thinks prolongs the problem instead of aiding people. "In my opinion, the extension of unemployment benefits is doing more harm than good in our communities," Owens said.

Tensions rise in the Black community, when African-American women, who may be perceived as less threatening are more readily accepted in Corporate America. "This causes a false sense of superiority," Okpara said.

Okpara said he heard of a white-collar, African-American man, who was abandoned by his professional wife, when he ran into financial difficulty during the recession.

He said that black relationships have already been strained by years of conflict, and some African-American women may not have the patience to ride out a man's economic troubles.

"There is a lot of combativeness in the black community," Okpara said. "You don't find the support (in marriage) that you find in other cultures. Being married can be an asset when you are unemployed, but it depends on what type of woman you have."

Owens added that unemployment may be harder on black and Latino men, because those cultures are less open towards stay-at-home dads. "A few men may relax in the new phenomena of being a 'house husband,' but this is not an accepted phenomena in the African-American and Latino American communities," Owens said.

According to Owens, extended periods of unemployment can be a major factor in the break up of a marriage.

"The most cited reason for divorce in America is finances or lack thereof," Owens said. "Most people marry for an emotional, physical, and financial partnership. When any of these pillars are challenged, the institution of marriage becomes vulnerable. Initially, after the loss of a job, a partner will most probably be supportive. However, as time fosters forward this support will become self limiting. This is where most problems will begin. In essence, for the partnership to consciously grow and stand strong, both parties will usually need to participate in the financial well being of the relationship."