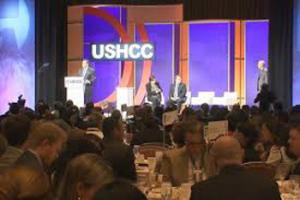 The leadership at the U.S. Hispanic Chamber of Commerce believes Utah offers a strong business environment, a growing Latino population and a compassionate approach to immigration. Photo Credit: good4utah.com

The U.S. Hispanic Chamber of Commerce sees opportunity in Utah and is holding its annual convention in Salt Lake City this week, a location the organization's leader said may seem "kind of counterintuitive."

U.S. Hispanic Chamber of Commerce President and CEO Javier Palomarez said that while Utah is not a usual Latino stronghold like Florida or California, it makes sense for the country's largest gathering of Hispanic-owned businesses.

"You don't think about Salt Lake City when you think about Hispanic entrepreneurs," he said. "Fact of the matter is, that it is happening in Utah."

Palomarez said the number of Hispanic-owned businesses in Utah is about 10,000 and growing, while the state's business-friendly environment has earned accolades from the Wall Street Journal and Forbes magazine.

Those were big draws for the U.S. Hispanic Chamber of Commerce, which advocates for more than 3 million Hispanic-owned businesses.

As many as 7,000 people are expected at this week's convention, with U.S. Housing and Urban Development Secretary Julian Castro set to give the keynote address Tuesday night.

Palomarez said convention attendees include representatives from major corporations, consulates, billion-dollar Hispanic-owned firms and mom-and-pop businesses, including those from Utah.

The number of Hispanic-owned businesses has blossomed in Utah, jumping 78 percent from 2002 to 2007, according to the most recent U.S. Census Bureau data.

"It's indicative of an economy that is very deliberately and very strategically taking advantage of small business growth, immigrant-owned small businesses and ensuring that it continues," Palomarez said.

That growth and the state's more compassionate approach to immigration were part of the attraction, he said.

Palomarez cited the Utah Compact, a set of principles pushed in 2010 as a more sympathetic way to handle immigration and acknowledging the economic value of immigrants, including those who have entered the country illegally.

"They looked at immigrants and particularly immigrant entrepreneurs as an asset rather than a challenge," Palomarez said.

Utah lawmakers passed a series of immigration laws in 2011 that included tougher enforcement mixed with a guest-worker and sponsorship program.

A federal judge struck down part of the enforcement law earlier this year, while the more compassionate programs have been postponed until 2017.

Utah leaders say the state programs need federal approval and they're waiting for Congress to take action on immigration.