Blacks Can Play Basketball But Not Welcomed In Stand 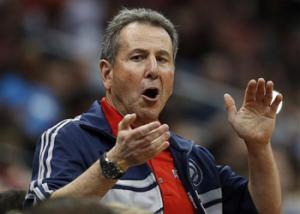 In this April 26, 2014, file photo, Atlanta Hawks co-owner Bruce Levenson cheers from the stands in the second half of Game 4 of an NBA basketball first-round playoff series against the Indiana Pacers in Atlanta. Levenson said Sunday, Sept. 7, 2014, he is selling his controlling interest in the team, in part due to an inflammatory email he said he wrote in an attempt "to bridge Atlanta's racial sports divide." Photo Credit: The Associated Press, John Bazemore, File

Blacks can play basketball, but they are not welcomed in the stand to view the game, a new revelation by another NBA team owner seems to indicate. The Atlanta Hawks officials agreed Monday to meet with civil rights leaders after one of its team owners disclosed that he wrote a racially charged email theorizing that black fans kept white fans away.

The Rev. Markel Hutchins said he and others wanted a chance to discuss what they think is a racist attitude permeating the entire organization. "Evidently the culture of racism and bigotry that is pervasive and ever-present in the Atlanta Hawks leadership is embarrassing to the city of Atlanta and undermines the very best of Atlanta's history of race relations and being a leader for the nation and the world," Hutchins said during a news conference outside Philips Arena, where the team plays.

Team officials said they expected to meet in the next two days, though details were still being worked out Monday. "I want to hear what people have to say, and I want to address their concerns," Hawks CEO Steve Koonin said.

Hutchins and others were responding to an announcement Sunday that team co-owner Bruce Levenson would sell his controlling interest in the team, thanks in part to an inflammatory email he wrote two years ago. Levenson said he wrote the email to the team's co-owners and general manager Danny Ferry in an attempt "to bridge Atlanta's racial sports divide."

Levenson said he voluntarily reported the email in July to the NBA, which pressured Clippers owner Donald Sterling to sell his team after he was recorded making racially charged comments. Steve Ballmer became the team's new owner Aug. 12.

Silver said the league's independent investigation of Levenson's email was ongoing when he was told Saturday night of Levenson's plan to sell his share of the team. Silver said Levenson's comments were "entirely unacceptable and are in stark contrast to the core principles of the National Basketball Association." 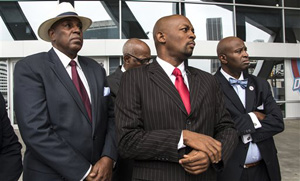 Silver said he commended Levenson for self-reporting the email and "for putting the best interests of the Hawks, the Atlanta community, and the NBA first" by announcing plans to sell his share of the team.

In the email sent in August 2012, Levenson gave his theory for why he said 70 percent of Hawks crowds were black. "My theory is that the black crowd scared away the whites and there are simply not enough affluent black fans to build a significant season ticket base," Levenson said.

"Please don't get me wrong. There was nothing threatening going on in the arena back then. I never felt uncomfortable, but I think southern whites simply were not comfortable being in an arena or at a bar where they were in the minority." Levenson noted the team's cheerleaders were black and hip-hop music was played.

On Sunday, Levenson said his observations were "inflammatory nonsense. I'm truly embarrassed by my words in that email, and I apologize to the members of the Hawks family and all of our fans," Levenson said.

In Atlanta, the Rev. Gerald Durley told reporters that the team's bigger problem was its lack of success, not the race of its fans. "Who would come with a team that's not winning? You've got to understand the market if you're talking about business," said Durley, who suggested that black fans could boycott games if they felt unwanted.

Atlanta famously branded itself as "The City Too Busy To Hate," during the Civil Rights movement, but the city's race history is complex. Hutchins said Levenson might be correct in suggesting whites are reluctant to mingle with blacks.

Hawks fan Gerald Perriman, 27, said he was initially angered by Levenson's email, then developed more mixed feelings. "He's being somewhat honest," said Perriman, who has a white mother and a black father. "I can believe white people are uncomfortable being in a minority, maybe in the arena."