NFL Rooney Rule: Eight Men Out No African-Americans In 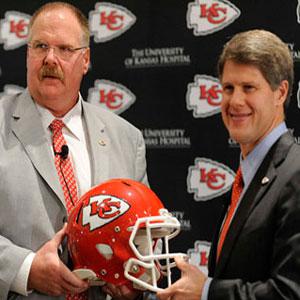 Some question why the Kansas City Chiefs would hire former Philadelphia Eagles coach Andy Reid, who was fired after an abysmal 4-12 season and mediocre results last year. Obviously, the Rooney Rule failed to protect minority candidates, although they did make sure they received consideration, not one of the eight teams hired an African-American, despite his track record or ability, it was a white out. Photo Credit: Dave Kaup/Reuters

With the hiring of Bruce Arians as the head coach of the Arizona Cardinals, all eight head coaching vacancies that came available in the National Football League are all filled – all with white men. Minority candidates, who by league rule are supposed to be considered for head coaching vacancies, were shut out. In a league where over 65 percent of the players are African-American, this is inexcusable.

Simply put, the NFL’S Rooney Rule states that minority candidates must be given equal weight when hiring for head coaching (as well as other) vacancies. Part of the reason the league adopted the rule was to short-circuit the Old Boys Network (OBN.) However, the OBN continues to recycle the same candidates for the top jobs over, and over again, until either by death or utter incompetency someone falls out of it.

The OBN was alive and well recently in the NFL. The Philadelphia Eagles fired head coach, Andy Reid, after an abysmal 4-12 season and mediocre results last year. But the OBN spun, and barely a week after his firing, Reid turned up in Kansas City, where they tripped all over themselves to throw money and power at him.

Meanwhile, Lovie Smith, the African-American head coach of the Chicago Bears who compiled a 10-6 record this year, was fired anyway, and couldn’t get a job. Smith has a Super Bowl appearance on his resume, as does Reid, and you would think that teams would be salivating to get him. But no, and he was one of two Rooney Rule candidates this year. Teams interviewed Smith to discuss their job, and then, having complied with the Rooney Rule, smiled politely and hired the white guy, they really wanted.

The other minority candidate trotted around like a trick pony by all the teams hiring head coaches was Keith Armstrong, the highly respected special teams’ coach of the Atlanta Falcons. Like Smith, he had no chance, and was all teams’ broccoli before they ate their cake.

Meanwhile, there was a rush to try, and hire high-profile college coaches – who were again all white.

The Eagles won the day, hiring Oregon’s Chip Kelly, who was ostensibly hired because his offensive schemes are so innovative, but there are many questions about whether they will work in the NFL.

However, Kelly has never dealt with the unique combination of athleticism and ego that are NFL players. Will he be able to reach them? Who knows? Smith and Armstrong have the experience and solid records of achievement in coaching these players, yet they received little consideration in the hiring process.

There are now just three black coaches in the NFL - Marvin Lewis in Cincinnati, Mike Tomlin in Chicago, and Leslie Frazier in Minnesota, just 3 out of 34 teams. That’s not just terrible, it’s ludicrous.

At the conclusion of this hiring season, which the NFL called “disappointing” as it pertained to minority candidates, they promised to seek changes in the Rooney Rule.