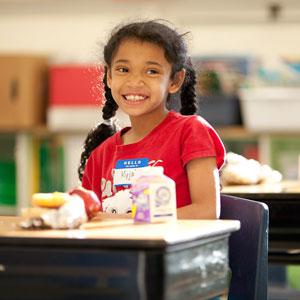 Race and ethnicity in the classroom: New programs offer many low-income children the option of eating breakfast and lunch at school, some schools now even allow students to eat breakfast in their homeroom class due to many students being unable to reach school in time to eat in the cafeteria. Photo Credit: farmtoschoolmonth.org

Many low-income kids arrive at school hungry everyday due to “food insecurity” and that means lower scores or even dropping out. But the good news is more low-income students and schools are participating in breakfast programs, according to the Food Research and Action Center’s (FRAC) latest School Breakfast Scorecard released January 15, 2013. Chief among the ways to ensure children have the best possible chance to escape the cycle of poverty is a high-quality education; at the very least a high school diploma, according to a September 2012 Urban Institute report, “Child Poverty and Its Lasting Consequence." Eating breakfast ups a child’s chance of staying in school.

“With the lingering effects of the most recent economic recession more families experience food hardship,” notes Daphne Hernandez, University of Houston, assistant professor of health and human performance. “The national average for children living in a household with food insecurity is near 22 percent. In Houston, the rate is 35 percent.”

According to the U.S. Department of Agriculture (USDA), “food insecurity” results in rationing, portion control, and the inability to offer balanced meals. The latest official poverty figures from the US Census Bureau put the number of poor people at 46.2 million - 15 percent of the population. Of the more than 55 million children enrolled in U.S. schools, over 31 million receive daily lunches through the National School Lunch Program, a USDA-subsidized program that supplies free or reduced priced lunches to students.

Many school districts also participate in the federally funded School Breakfast Program, but less than half of the eligible students are not taking advantage of the program. It’s logistics: They typically require children to eat before school apart from other kids, causing some to feel singled out as “poor.” And if the bus is late, they miss breakfast.

To take up the slack in the government’s breakfast program, a growing group of small, local organizations by pooling resources to help more low-income school children eat a healthy breakfast. One program, Partners for Breakfast in the Classroom, is run by a coalition of organizations, who simply want to provide breakfast for students at the start of the school day in homeroom so all children can participate. It is a strategy that works particularly well among urban school districts with high concentrations of low-income students, according to FRAC, one of the Breakfast in the Classroom partners.

The breakfast program hit key milestones during the 2011-2012 school year, according to FRAC’s School Breakfast Scorecard. For the first time, more than half of all low-income students (50.4 percent, up from 48.2 percent in the 2010-2011 school year and 46.1 in 2007-2008) who participated in school lunch also ate a school breakfast and more than 90 percent of schools that operate the National School Lunch Program also offered the breakfast program. 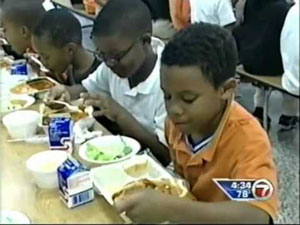 “More low-income children are eating breakfast and more schools are offering it, and that’s good news for children’s health and well-being,” says FRAC President Jim Weill. “Since FRAC launched its national school breakfast campaign in 1988, the share of schools participating has grown from less than 50 percent to more than 90 percent, and the number of children has grown from 31 percent to 50 percent.”

FRAC measures the program by comparing the number of children receiving school breakfast to the number participating in the National School Lunch Program and their goal is to reach at least 70 low-income children with breakfast for every 100 who receive lunch. If states reach the 70-per-100 goal, FRAC estimates that breakfast will reach an additional 4.1 million low-income children and states would receive more than $1 billion in added child nutrition funding.

If that goal is achieved, summer school is the next target: “Only one in seven of the low-income students who depended on the National School Lunch Program during the regular 2010-2011 school year received summer meals in July 2011,” according to another FRAC report.