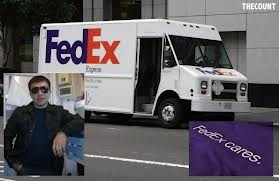 SALT LAKE CITY (AP) — A Utah truck driver alleges FedEx fired him because of his Russian accent, even though he offered to appear before corporate higher-ups to demonstrate his English-speaking abilities.

Ismail Aliyev has filed a federal discrimination lawsuit against the Memphis, Tenn.-based shipping company and the long-haul contractor that employed him and was ordered to do the firing.

Aliyev worked for GNB Trucking Co. in the Salt Lake City suburb of West Valley. The small business owns and operates FedEx-branded trucks and provides uniformed drivers for FedEx. Aliyev says his trouble started months into the job when an Iowa weigh station gave his company a warning — but not a citation — about his Russian accent. One of the requirements of holding a commercial driver's license is the ability to communicate.

"I think for a driver, my English is not too bad," said Aliyev, now an independent trucker, who spoke to The Associated Press by cellphone briefly Wednesday while driving in Nebraska.

Aliyev has an accent "but it's very understandable," said Robert H. Wilde, his lawyer. "GNB said he was an excellent employee and would like to keep him, but it was instructed by FedEx to terminate him."

Wilde said the firing was ordered by a FedEx manager who didn't bother to speak with Aliyev, and that Aliyev offered to fly to FedEx headquarters to show off his language skills but was turned down.

Aliyev's son said it wasn't the first time the family had experienced discrimination. As Turks in Russia, they were forced to flee in 2005, landing in Utah as political refugees, Elshad Aliyev said.

"It really does hurt," said Elshad Aliyev, who speaks flawless English. "We lost everything in Russia."

He said his father can be a little hard to understand on a telephone but "if you would talk to him personally, you could communicate well enough."

GNB Trucking said FedEx controls the hiring and firing of its truck drivers and a host of other business terms. Ben Ishhanov, a manager for the trucking outfit, speculated that Ismail Aliyev had flunked an English test given by a FedEx field office after his hiring.

His son, however, maintains Ismail Aliyev passed that test.

"He was told to write something on a blackboard and read some papers," Elshad Aliyev said.

The GNB manager at first said he didn't recall Ismail Aliyev or being ordered to fire any truck drivers because of their speaking ability.

"We haven't fired anyone for that," said Ishhanov, speaking with what he said was an Armenian accent. Then he added, "If FedEx told us to fire a driver, we can't do anything about that. Some guys don't know any English. That's the problem."

Ismail Aliyev has held a commercial license since 2009 and was driving without any problems before FedEx ordered his firing in September, his lawyer said.

"FedEx just decided they didn't want to deal with him, or even talk to him," said Wilde, who filed the lawsuit Friday in U.S. District Court in Salt Lake City. The lawsuit seeks an unspecified amount for lost wages and punitive damages.