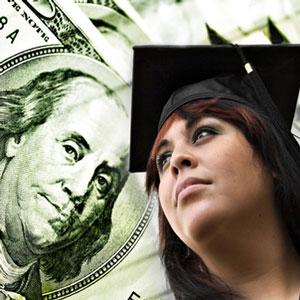 The ever-rising cost of college is becoming a deterrent to a quality education for many ethnic minorities. Photo Credit: psmag.com

As the price of college skyrockets, and the American economy struggles, the option of college is increasingly becoming a pipe dream for many ethnic minorities.

Many young ethnic minorities now look into low-cost alternatives to college such as trade schools, which means shorter courses that often lead to higher wage jobs. In addition, some minorities opt to join the military. A recent NPR article stated that, "About 60 percent more college grads joined the Navy last year than in 2007. Many joined for employment, others joined to pay off their college debt."

Whether it's joining the military, going online, or going the trade route, many alternatives to a traditional four-year college program exist. Raylon Catlett, a graduate of Excelsior College, a private institution geared toward adult students, encourages ethnic minorities to keep an open mind when considering college.

He says many low-cost options exist to fund an education, such as online classes, part-time studies, or equivalency courses. Catlett, an African American, who works in the financial services sector, went the alternative route by taking several industry-related courses as part of his work, and got credit for them towards his degree.

His bachelor’s degree in business management took about four years, but he explains that he saved thousands of dollars because many of the proficiency exams he took for college credit only cost about $95 each.

Catlett encourages African American students to look into online courses which are becoming increasingly popular in the "the brick and mortar" colleges. "More people take online classes because they are so busy,” he says.

He added that online classes and proficiency exams take a certain kind of student to make it work because it requires someone who is an independent learner. “A lot of African Americans are independent learners, but just make sure you look at how you learn before deciding," he says.

In Catlett’s opinion, many young people of all ethnicities thrive in nontraditional programs. For example, one of his graduating classmates was a 20-year-old who crammed a four-year program into two years, so young people should not let the cost of college become a deterrent. "You can save a lot of money by taking nontraditional classes and proficiency exams. Going to an employer without a basic degree is crazy because it helps if you want to be competitive in today’s business world."

Ultimately, college isn't about how many friends you made, it isn't about how much studying you did, and it isn't about the extracurriculars you were involved in. College is about a piece of paper with some signatures on it that assures your future employer that you spent x amount of time learning a specialty. Where this piece of paper comes from is key; traditional 4 year university graduates have an easier time finding work then say someone who spent time in a trade school. From personal experience and being Hispanic myself I know times are tough and money definitely doesn't grow on trees (trust me I've checked), but one thing students in this generation need to understand is that in order to further themselves they must make sacrifices. The money is out there, scholarships are plentiful and loans aren't as bad as they seem. What my main point is that we must reach for our goals! We cannot settle on what is easier and more affordable. If you get accepted to UCLA or Stanford go! Opportunities don't come often so don't allow them to slip through your fingers.