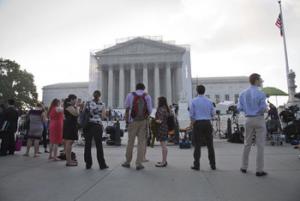 A three-judge federal appeals court heard arguments for a second time in November 2014 week after the U.S. Supreme Court sent the case back for a closer look at the affirmative action case. Court observers believe conservative justices may be ready to reconsider past affirmative action decisions. Photo Credit: online.wsj.com

A federal appeals court is again judging the school's fairness and drafting a ruling that could change college affirmative action programs nationwide, sixty-seven years after the first lawsuit over who gets to attend the University of Texas.

On one side, officials at the flagship campus in Austin insist they've developed a system that subtly includes race as one of seven factors for considering students who don't earn automatic admission by graduating in the top 10 percent of their high school class. UT President Bill Powers insists that factoring in race is necessary to create a diverse learning environment.

Opposing the policy is Abigail Fisher, a white woman denied admission to UT, who says race shouldn't be considered at all. Her attorney, Bert Rein, told the 5th Circuit Court of Appeals that the university could achieve sufficient diversity without considering race.

The three-judge panel heard arguments for a second time in November 2014 week after the U.S. Supreme Court sent the case back for a closer look. Court observers believe conservative justices may be ready to reconsider past affirmative action decisions. 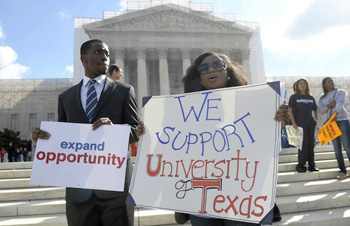 Justice Anthony Kennedy said in his ruling that a court should approve the use of race as a factor in admissions only after it concludes "that no workable race-neutral alternatives would produce the educational benefits of diversity." Fisher's attorneys proclaimed that the court wants further restrictions on race-based policies, while the university insisted that Kennedy had reaffirmed the need for affirmative action.

The 5th Circuit judges questioned both sides aggressively at the rehearing, asking what constitutes a necessary affirmative action policy and at what point would it no longer be necessary.

Judge Patrick Higginbotham and Judge Carolyn Dineen King pointed out that the Legislature passed the Top 10 percent rule at state universities to bring racial diversity without using race. The policy gives top students at underperforming minority high schools an advantage over students with better test scores who attend more competitive white high schools. About 75 percent of students are admitted under this state law.

Fisher did not challenge the Top 10 percent rule, but focused her lawsuit on how the other 25 percent are admitted using formulas called the Academic Achievement Index and the Personal Achievement Index. 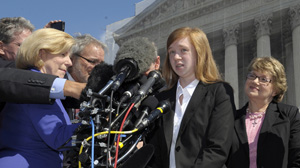 The academic index looks at test scores and high school performance. The personal index considers seven factors, one of which is called special circumstances. A student could receive a boost for special circumstances if they come from an impoverished family or school, have only one parent at home, their family does not speak English, they had to work to provide for their family, their SAT score was above their school's average or if they are a minority.

University officials have testified that in 2008, when Fisher applied, no one with her grade point average was admitted and she would not have gained admittance if race were not a factor. They say they followed past Supreme Court decisions to the letter by not setting a quota for minority students and making race part of a holistic admissions process.

Rein says university officials can't know for sure what would have happened if the personal index had been different.

One question for the appeals court is whether considering race in such a small way is superfluous and unnecessary. Rein said UT's policy only boosts minority admissions by 2 percent.

Powers said that between 1997 and 2004 when race was not a factor, African American enrollment dropped by 50 percent.

The second question is whether the university has enough minority students. Rein said the overall percentage of minorities at UT - 51 percent - reflects the population of Texas and therefore affirmative action was no longer required. Power argues that minority students are not evenly distributed across the university and bringing meaningful diversity requires more work.

For most of its 130-year history, the University of Texas at Austin refused to admit black freshmen. The 5th Circuit, and potentially the Supreme Court on appeal, could use this case to decide that affirmative action has done enough to correct that injustice and is no longer necessary anywhere in the nation.