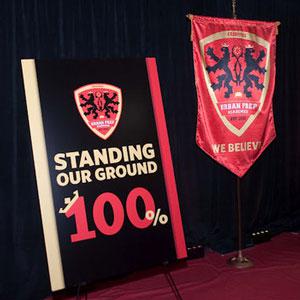 One hundred percent of the senior class of African-American students are going to a four-year university or college for the fourth year in a row. Photo Credit: examiner.com

Urban Prep Educates Its Students Straight Into College
By Glenn Minnis
A Chicago public high school is not only beating the odds in terms of educating all its students, it’s giving concerned observers yet another layer to ponder in addressing the city’s ongoing gang and violence problem.

Nestled in the heart of Englewood, one of the city’s most notorious and crime-ridden neighborhoods, for the fourth straight year all the students from the Urban Prep Academy senior class have gained acceptance at a four-year university.

With Mayor Rahm Emmanuel proudly looking on, the last seven members from the 2013 class of 167 graduates were handed their acceptance letters during a pomp and circumstance filled, though business-as-usual gymnasium held ceremony just last week.

Over the last four years, the all-male charter school dedicated to African-American boys has now sent hundreds of graduates to institutions ranging from Morehouse College, the University of Illinois, and Howard University, most of them students, CPS had previously given up on as unredeemable and unwilling to learn.

"We did it again,” said Tim King, who founded Urban Prep Academies in 2002 with a fellow group of African-American education, business, and civic leaders. “We are sending all our seniors to a four-year college or university. That is something every high school in Chicago cannot say year after year.”

For many, the school’s amazing rate of success also changes the conversation about Englewood, and what it’s much maligned teen populous is truly capable of achieving.

Critics are quick to point out the rate of youth homicide in the South Side neighborhood is nearly five times higher than the citywide mark and over the past twelve months the district ranked second among all 25 police districts in homicides and first in overall violent crime. 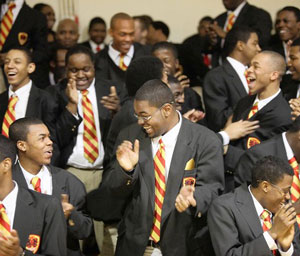 And then there’s Urban Prep, where a little added time and extra effort in working with teens is literally proving the difference between life and death. The students now excelling are every bit as challenged as those constituting the area’s most violent street gangs and filling up the city’s many jails and prisons.

Nearly 90 percent of the school’s students are African-American and almost all of them qualify for free lunch and can find it more than challenging to safely navigate their daily walk to and from classes each day. The school also has a strict tie and blazer dress code that comes as something entirely new for most of them.

And still, they rise to the challenge because finally they feel as if someone cares. They do so because someone at last has taken the time to help them truly internalize the school’s simple yet soul-reflecting motto of “We Believe.”

“Anything is possible if you put your mind to it and surround yourself with people who care,” 17-year-old senior Julius Olalusi now preaches. Next fall, Olalusi will go from Englewood to either, Morehouse College, Cornell University, or the University of Pennsylvania, all institutions where he’s already been accepted to.

“Achieving goals I set for myself four years ago is a good feeling,” he said. And with some luck, hopefully it comes to be the future of Englewood.

In one of my classes we were talking about countries like Portugal and Canada who have stopped putting money into fighting drugs and have started putting money into prevention. The research shows that crime-rate and drug use has decreased in these countries. I think that the U.S. needs to realize that by putting more money into the schools and rehabilitation programs they are more likely to reduce crime-rate and druge use. Control theory argues that there are four social bonds: attachment, commitment, involvment and belief. This school has helped strengthen their students' bonds to society. The students now believe in school system; they believe that the school cares about and believes in them. These students now have an attachment to the school, they are committed to doing good work and they are involved in school. Because these bonds have been strengthened, these students are less-likely to engage in deviance such as joining gangs and doing drugs. This school is a good example of how changing the ideology of a school can help the students to better succeed.

This article is proof that with a little love and care everybody can make it. Clearly, it is not the kids lack if interest of their predestined lives that are holding them back but simply investment in their lives from someone other than themselves. This one school can illustrate where changes need to be made in the education system in order to provide the means to unleashing everybody's potential. we need to distribute funding to equally to schools across the country in order for these facilities to provide their students what they truly need. There is no reason why some children should be learning from decade old textbooks while others use computers and IPads etc. It is especially the children who reside in the inner cities and poverty or violent stricken neighborhoods that need assistance and funding. Affluent parents can already live in safe neighborhoods and send their children to good schools who then can return home to do homework in a supportive environment. Those kids don't need extra help to get ahead. But those who are not raised in an affluent lifestyle do. They need not only to be told that they can accomplish anything but given the tools so that their already tough lives aren't made harder by trying to succeed.