Brown v. Board of Education Revisited 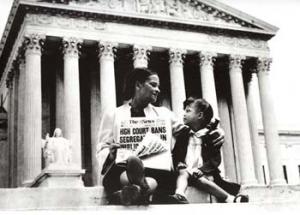 Sixty years ago, on May 17, 1954, the Supreme Court ruled unanimously that racial segregation of public schools violated the equal protection guarantees of the 14th Amendment. Photo Credit: brownat50.org

Brown vs. the Board of Education is being revisited sixty years after the court ruled that segregated schools violate the equality provision which is guaranteed by the Constitution of the United States. It is 2014, where is America today in guaranteeing equal protection that ensures that all children should be able to attend quality integrated public schools?

On May 17, 1954, the Supreme Court ruled unanimously that racial segregation of public schools violated the equal protection guarantees of the 14th Amendment.

The case arose from lawsuits filed by the NAACP Legal Defense Fund challenging the segregation of schools in Delaware, Virginia, South Carolina and Kansas. It was named Brown v. Board of Education after Oliver Brown, alphabetically the first plaintiff in the Kansas case. His daughter Linda was barred from a white school near her Topeka home. 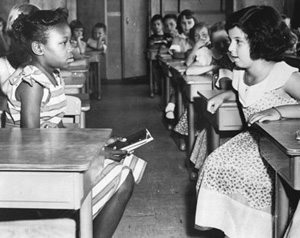 Below are excerpts from the ruling, written by Chief Justice Earl Warren:

"In these days, it is doubtful that any child may reasonably be expected to succeed in life if he is denied the opportunity of an education. Such an opportunity, where the state has undertaken to provide it, is a right which must be made available to all on equal terms."

"We come then to the question presented: Does segregation of children in public schools solely on the basis of race, even though the physical facilities and other 'tangible' factors may be equal, deprive the children of the minority group of equal educational opportunities. We believe that it does."

"To separate (black children) from others of similar age and qualifications solely because of their race generates a feeling of inferiority as to their status in the community that may affect their hearts and minds in a way unlikely ever to be undone."

"We conclude that, in the field of public education, the doctrine of 'separate but equal' has no place. Separate educational facilities are inherently unequal. Therefore, we hold that the plaintiffs and others similarly situated for whom the actions have been brought are, by reason of the segregation complained of, deprived of the equal protection of the laws guaranteed by the Fourteenth Amendment."

"We have now announced that such segregation is a denial of the equal protection of the laws."