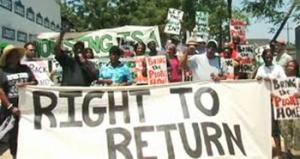 An advocacy group that investigates complaints of discrimination, the Greater New Orleans Fair Housing Action Center, said Friday that St. Bernard has agreed to settle the case for $1.8 million. The settlement stems from a 2006 lawsuit filed against the parish. Photo credit: sfbayview.com.

Blacks win a settlement for a housing discrimination case where they were restricted from renting in new areas that had been rebuilt following Hurricane Katrina. A settlement has been reached in a long legal fight over St. Bernard Parish housing policies that allegedly restricted black people from renting in the parish as it rebuilt after catastrophic damaged caused by flooding from Hurricane Katrina.

An advocacy group that investigates complaints of discrimination, the Greater New Orleans Fair Housing Action Center, said Friday that St. Bernard has agreed to settle the case for $1.8 million. The settlement stems from a 2006 lawsuit filed against the parish.

After Katrina in 2005, St. Bernard passed an ordinance restricting the rental of single-family houses to blood relatives of property owners. Later, the housing center fought attempts by the parish to restrict developers from building multi-family apartments. The housing center charged the ordinances discriminated against blacks, who made up about 10 percent of the parish's population before Katrina.

"We are pleased that the parish has once and for all agreed to pay up and put this matter to rest," said James Perry, the center's executive director. "In the face of officially sanctioned discrimination on the part of parish leaders, our fight ensured that all people, regardless of race, were able to make a home in St. Bernard." 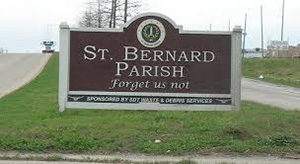 The U.S. Department of Justice also got involved in the fight in 2012 and a settlement of more than $2.5 million was announced in May 2013 with the federal government. The federal lawsuit charged that St. Bernard officials fought for years to limit rental housing for African-Americans "under the pretext of post-Hurricane Katrina recovery planning." The federal lawsuit also said the actions were an attempt to keep blacks from moving into St. Bernard.

Under the terms of the federal settlement, St. Bernard agreed to establish a new Office of Fair Housing and hire a fair housing coordinator.

Perry said both of those actions have been taken. He said the number of blacks in the parish has increased and he attributed some of that to the success of the housing suits.

Over the years, the housing center said St. Bernard officials appealed rulings even though they lost "round after round" in federal courts. The settlement, the center said, "ends the appeals process altogether."

St. Bernard President David Peralta said Friday he was unfamiliar with the settlement. A lawyer for the parish declined to comment.

The terms of the agreement were not disclosed Friday. The settlement now awaits the approval of U.S. District Judge Helen Ginger Berrigan. The judge received notice of the settlement on Monday, according to court records.