No Indictment for Killing Michael Brown 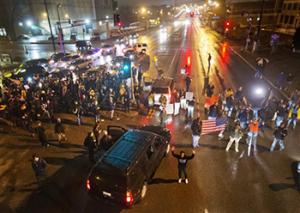 The announcement of no indictment for the killing of Michael Brown has incited protesters. Photo Credit: The Associated Press.

There will be no indictment for the killing of Michael Brown. A grand jury decided not to indict a Ferguson police officer in the death of Michael Brown, the unarmed, black 18-year-old whose fatal shooting sparked weeks of sometimes-violent protests.

Brown's killing reignited a debate over how police treat young black men in the U.S. It drew attention to racial tensions simmering in Ferguson and other U.S. communities four decades after the civil rights movement of the 1960s.

The U.S. Justice Department is conducting a separate investigation into possible civil rights violations that could result in federal charges. The department also has launched a broad probe into the Ferguson Police Department, looking for patterns of discrimination.

The panel has been considering charges against Wilson, who fatally shot Brown after a confrontation on Aug. 9. The shooting inflamed tensions in the predominantly black St. Louis suburb that is patrolled by an overwhelmingly white police force. Rioting occurred the following night, protests erupted for weeks and police responded with armored vehicles and tear gas.

The tensions evoked other racially charged cases, including the riots that rocked Los Angeles in 1992 after the acquittal of white police officers in the videotaped beating of black motorist Rodney King. More recently, peaceful protests followed the 2013 not-guilty verdict in the Florida slaying in unarmed black teenager Trayvon Martin by George Zimmerman, who was not a police officer but coordinated the local neighborhood watch.

Missouri Gov. Jay Nixon traveled to St. Louis from the state Capitol and held a news conference ahead of the announcement, asking for "peace, respect and restraint."

Authorities quickly stepped up security around the courthouse where the decision was announced. Barricades were erected, and more than 20 Missouri state troopers were seen silently assembling with rifles, 3-foot (0.91-meter) batons, riot shields and other equipment. Some nearby businesses boarded up their windows, just as many shops have already done near the site of Brown's death in Ferguson.

Hours before the announcement, dozens of people gathered in the parking lot across the street from the Ferguson Police Department. Many stood right at the edge of the lot, almost in the street, chanting things "no justice, no peace, no racist police."

One woman leading the group screamed through a bullhorn "indict that cop. Police don't like it. We want an indictment."