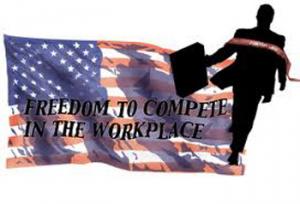 AMC Services is accused of discriminating against blacks and women for years. Photo Credit: abilitymagazine.com

EEOC, the federal Equal Employment Opportunity Commission, is suing a Montgomery County business, alleging that it's been discriminating against blacks and women for years.

The lawsuit was filed Monday in federal court in Maryland against ACM Services, an environmental remediation services contractor based in Rockville.

ACM Services President R. Thom Hess did not return a call and email for comment Tuesday.

The lawsuit, announced by the commission on Tuesday, alleges that since at least January 2005, ACM has exclusively used word-of-mouth recruitment practices for field laborer positions to avoid black applicants, and has refused to hire women for such positions as well.

Michelle Crew, an outreach and training manager at the commission's Cleveland field office, declined to name the specific managers at ACM accused of harassment, saying the commission's attorneys prefer to litigate the matter in court, not in the media.

"We are committed to ensuring that everyone is afforded equal opportunities during the hiring process to be judged on abilities, and not race or sex," he said.