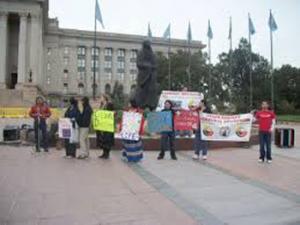 People are gathering in places like Oklahoma city in efforts to increase understanding across race and the police. Photo Credit: examiner.com

Citizens of Oklahoma City gathered to take steps to improve relations between blacks and police. More than 100 people turned out Thursday at the Oklahoma Capitol to rally, discuss race-related issues and seek ways to educate themselves and police.

The rally came in response to the shooting death of 18-year-old Michael Brown in Ferguson, Missouri, and subsequent protests. Brown, who is black, was unarmed when he was shot to death by a white police officer.

The Oklahoma City event, called the "Hold Your Hands Up, Don't Shoot! Make Your VOTE Count Rally," featured speakers from groups including the National Association for the Advancement of Colored People, American Civil Liberties Union, Council on American-Islamic Relations and Cimarron Alliance.

"If you think Ferguson is an isolated incident, you are wrong," said ACLU of Oklahoma director Ryan Kiesel. "Ferguson is America."

Scott J. Hamilton, director of the Cimarron Alliance, said one group discriminates more than any other in Oklahoma as he pointed to the Capitol behind him, referring to state lawmakers.

"We can't go on any longer and not believe racism is not tearing our city, our state and our nation into shreds," he said. 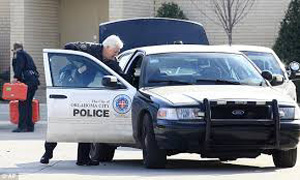 Throughout the two-hour ceremony, speakers would yell "hold your hands up" to which rally attendees would yell back "don't shoot!"

At the midway point, names were read of Oklahomans who died at the hands of police.

Elizabeth Myrks was among those in attendance. Myrks held up a sign with pictures of her brother, who she says was run over and dragged by police during a routine traffic stop in 2005.

"When will the blood shed stop," she said. "They're killing these innocent babies."

Virgil Green, who is the Oklahoma president of the National Organization of Black Law Enforcement Executives, shared a response from law enforcement. Green acknowledged that many communities have few black officers like himself, and he called for better communication and interaction between community members and police officers.

Four Oklahoma Highway Patrol troopers stood under the shade of a tree a few hundred feet away watching as the rally unfolded.