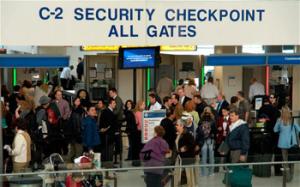 Border Patrol agents who work at airports within 100 miles of the border are often in plain clothes and work closely with Transportation Security Administration agents to monitor people, even those who are flying within the country. Photo Credit: talesfromthelou.wordpress.com

Jose Antonio Vargas, a Pulitzer Prize winner, was detained at the McAllen/Miller International Airport in south Texas this week after being questioned about his citizenship status while visiting the region to attend vigils related to the Central American immigration surge. For many who do not live in border states, the idea of being asked for immigration status while flying within the U.S. seems foreign. Here are some details about why and how the U.S. Border Patrol operates in airports and locations along the country's border.

Q: What do border patrol agents do at airports?

Border Patrol agents who work at airports within 100 miles of the border are often in plain clothes and work closely with Transportation Security Administration agents to monitor people, even those who are flying within the country. Agents don't typically have offices within the airport, and the Border Patrol will not say how many agents staff airports at any given time.

But they are there.

They check passports, green cards, and other forms of identification while standing over the shoulder of a TSA agent. Essentially, agents are on the lookout for suspicious behavior such as extreme nervousness or appearing to be lost. If an agent sees that such a person presents a green card but looks nervous, the agent would likely question that person. The agent would ask questions such as where the person's mother was born and how long it's been since they entered the country to determine whether the ID they are using is counterfeit.

In the case of Antonio Vargas, Border Patrol agents were standing alongside TSA personnel at the McAllen/Miller International Airport, which is only a few miles from the U.S.-Mexico border, when the activist tried going through. Vargas does not have a government-issued U.S. identification card, and uses a passport issued by his native Philippines. He was arrested after telling an agent that he was in the country illegally. Vargas was released Tuesday on his own recognizance with a notice to appear before an immigration judge. 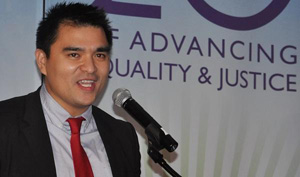 Q: Does the border patrol operate checkpoints on road, too?

Yes. The border patrol has dozens of in-land checkpoints around the Southwest and in northern states such as Washington. The checkpoints can be within 100 air miles of the country's border. They are usually located on highways and small roads. For example, there is a makeshift checkpoint on a two-lane road just outside a small Arizona town called Arivaca, where residents are protesting the border patrol's presence. The town is 20 miles from the border.

Arivaca residents, regardless of their citizenship and immigration status, must pass through the checkpoint every time they leave town, which is regularly because the town does not have schools or a large grocery store and many residents work outside the town. They are asked whether they are U.S. citizens. The ACLU says the border patrol can only briefly detain travelers, and they cannot use checkpoints for "general crime control."

Q: What are the major differences between what border patrol agents do at road checkpoints and what they do at airports?

Checkpoints are clearly marked. All people who drive through a checkpoint are asked to reveal whether they are U.S. citizens - that is not the case at airports. And while agents at checkpoints are in full uniform, those at airports are more likely to be in plain clothes. One thing they have in common: They use the study of behaviors to determine whether someone might be without legal status or committing a crime. And both are used more as deterrents than they are for catching criminals. 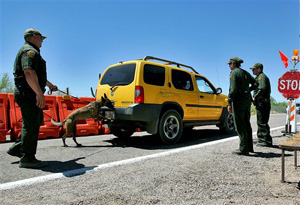 Q: What is the difference between customs agents and border patrol agents in airports?

There are two immigration agencies that operate at airports. One is Customs and Border Protection, which places agents at all international airports. The other is the U.S. Border Patrol, which falls under the umbrella of CBP. Border Patrol agents work mostly in airports that are within 100 miles of the border. Customs agents use an electronic system to determine whether someone is legally allowed to travel into the United States, and they are the agents travelers typically see when they return from overseas trips.

Q: What would lead a border agent to detain someone at a checkpoint?

Border agents must have "reasonable suspicion" to detain someone at airport and road checkpoints. For example, if a driver passed through a checkpoint and said he or she was a U.S. citizen but appeared to be very nervous, an agent could have reasonable suspicion that the person is lying and could question them further. If questions are not answered sufficiently and the person cannot prove his or her legal status, an agent is able to place them under arrest, process them and turn them over to Immigrations and Customs Enforcement, a separate agency.

Agents often use body language to determine whether someone is acting suspiciously. They're not allowed to racially profile, but agents often become suspicious if the person they encounter does not speak English or has a thick, non-English accent. Civil rights groups argue that racial profiling at checkpoints is inevitable because there are very few other indicators an agent could use to determine culpability.