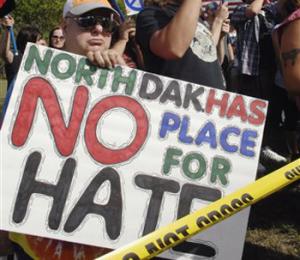 In this Sept. 22, 2013. file photo, Jay Schechter holds a sign, while participating in a protest rally outside Craig Cobb's house in Leith, N.D. The town of Leith has invited Gov. Jack Dalrymple and members of North Dakota's congressional delegation to help the community celebrate its birthday and the end of a months-long clash with Cobb, who unsuccessfully tried to take over the town. Leith is holding is 105th birthday bash the weekend of July 19-20. Photo Credit: The Associated Press, Bismarck Tribune, Will Kincaid, File

"This will be a celebration of freedom from the last nine months of terror … by a small band of neo-Nazis headed up by Craig Cobb and his associate Kynan Dutton, who have been convicted and sentenced for their crimes," town spokesman Greg Bruce said in a statement Tuesday.

Cobb bought several Leith properties about two years ago, and last year invited other white supremacists to join him in forming an Aryan enclave in the town of fewer than 20 residents. The community considered several options to quash Cobb's aspirations, although he effectively ended them himself; Cobb and Dutton were arrested and charged with terrorizing after they patrolled the neighborhood with guns.

Both men reached plea deals earlier this year that put them on probation but kept them out of prison. 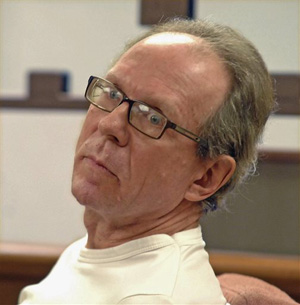 It wasn't immediately clear if Dalrymple and the other invitees planned to attend Leith's celebrations. Their spokesmen and spokeswomen either did not yet know or didn't immediately respond to inquiries Wednesday. Bruce said he hopes as many as 300 people will attend.

Cobb, who lives in Bismarck, has petitioned his home state of Missouri to assume responsibility for his probation supervision and allow him to move back. He no longer owns property in Leith and has been ordered to stay away.

City leaders filed a complaint with the state attorney disciplinary board in April accusing Grant County State's Attorney Todd Schwarz of acting unprofessionally and possibly unethically while prosecuting Cobb. They plan to meet with a committee investigating the complaint Friday, Bruce said.

"There is absolutely nothing I've done that violates any rules of professional conduct," he said Wednesday. "If that plea agreement was wrong, with the evidence in place, the judge would not have accepted it."