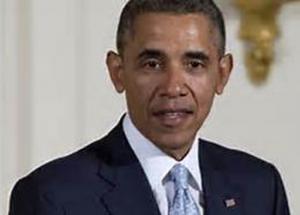 President Barack Obama mourned those killed in a weekend attack on two Jewish facilities in Kansas, saying no one should have to worry about their security while gathering with their fellow believers. Photo Credit: The Associated Press, Carolyn Kaster

President Barack Obama on Monday mourns those killed in a weekend attack at two Jewish facilities in Kansas, saying no one should have to worry about their security while gathering with their fellow believers.

Obama noted that synagogues and temples across the country are taking extra security precautions following the shooting, adding: "No one should ever have to fear for their safety when they go to pray."

The president spoke during an Easter prayer breakfast at the White House and vowed that the government would provide whatever is needed to support the investigation. He urged Americans to stand united against "religious-based" violence.

"As Americans, we not only need to open our hearts to the families of the victims, we've got to stand united against this kind of terrible violence, which has no place in our society," Obama said. "We have to keep coming together, across faiths to combat the ignorance and the intolerance, including anti-Semitism that can lead to hate groups and violence because we are all children of God." 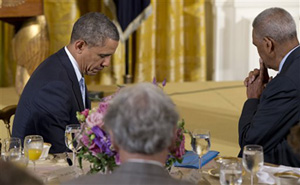 Three people were killed Sunday when a gunman opened fire on a Jewish community center and Jewish retirement complex near Kansas City. The man accused in the shooting is a well-known white supremacist and former Ku Klux Klan leader who was once the subject of a nationwide manhunt. Officials were investigating the attack as a hate crime, although two of the victims, a man and his grandson, were not Jewish and were at the community center for a singing competition, relatives said.

Obama said the fact that the attack came as Jews prepare to celebrate Passover and Christians prepare for Easter makes the tragedy "all the more painful."

The president also recalled his meeting at the Vatican with Pope Francis last month. Obama said the pope's message of justice and inclusion, especially for the poor, is a reminder to live righteously and humbly.

The breakfast was attended by faith leaders including Al Sharpton, African Methodist Episcopal Church Bishop Vashti Murphy Mckenzie and Rev. Samuel Rodriguez, president of the National Hispanic Christian Leadership Conference. They were treated to a performance by Washington Performing Arts Society's Children of the Gospel Choir and dined on mini bagels with lox and cream cheese and fruit parfait.

The annual breakfast continued a tradition that Obama started in 2010.