Browning of America Not a Factor for GOP 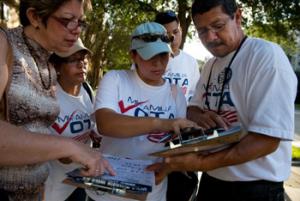 Hispanics make up 16 percent of the U.S. population, a share that will continue to grow, according to Census projections. That's why some Republican leaders are concerned. Photo Credit: nbclatino.com

The browning of America, fueled by immigration and higher birth rates among Hispanics and blacks, means that the U.S. population is becoming less white. That fact seems to have been lost on many in the GOP. These changes have largely bypassed congressional districts represented by Republicans, adding to divisions between the GOP and Democrats on issues like immigration.

National GOP leaders have been urging Republicans in Congress to reach out to Hispanic voters on immigration, well aware that Hispanics are the nation's fastest-growing group. Those calls have fallen flat among many House Republicans, who have been unwilling to advance legislation that would provide a pathway to citizenship for an estimated 11 million immigrants living in the U.S. illegally.

Meanwhile, President Barack Obama and Democrats in Congress have made immigration overhaul a priority. Demography helps explain the divide.

Following the 2010 census, Republican legislators in key states redrew congressional districts in ways that favored their candidates. That helped House Republicans maintain a 33-seat majority in the 2012 election, but it left many House Republicans largely isolated from demographic changes sweeping much of the country.

While America is becoming more diverse, most congressional districts represented by Republicans are overwhelmingly white, with relatively few minorities. "That's not going to last forever," said William Frey, a demographer at The Brookings Institution. "Sooner or later, demography is not on the side of those places staying isolated."

On average, Republican-held districts are 74 percent white. Hispanics make up 11 percent and blacks make up 9 percent. By comparison, the average district represented by a Democrat is 51 percent white, 23 percent Hispanic and 17 percent black - more diverse than the country as a whole.

Nationally, non-Hispanic whites make up 64 percent of the country, a share that has been declining for decades. Over the next 30 years, the Census Bureau projects that whites will lose their majority status. Racial and ethnic minorities already make up about half of all children under 5. 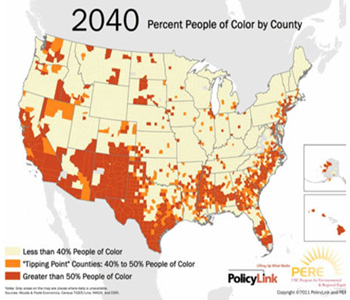 Hispanics make up 16 percent of the U.S. population, a share that will continue to grow, according to Census projections. That's why some Republican leaders are concerned. In the 2012 presidential election, Republican Mitt Romney got just 27 percent of the Hispanic vote. Following the election, the Republican National Committee conducted an analysis to see what went wrong.

Among the RNC's findings: "We must embrace and champion comprehensive immigration reform. If we do not, our party's appeal will continue to shrink to its core constituencies only."

In the Senate, some Republicans have embraced the issue, led by Sen. Marco Rubio of Florida, a possible presidential contender in 2016. Last summer, 14 Senate Republicans joined with Democrats to pass a comprehensive immigration bill that would couple increased border security with a path to citizenship for those in the U.S. illegally.

In January, House Republican leaders unveiled their principles for overhauling immigration laws. They included a proposed pathway to legal status for millions of adults who live in the U.S. unlawfully - after they pay back taxes and fines - but not the special route to citizenship that Obama and many Democrats favor.

Rank-and-file Republicans balked and some labeled the plan "amnesty." A week later, House Speaker John Boehner, R-Ohio, all but ruled out passage of immigration legislation before this fall's election.