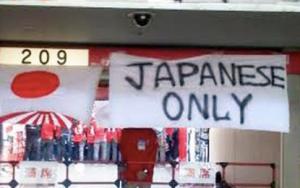 The banner proclaiming "Japanese only" led to a penalty for the Urawa Reds soccer team. Though it was hung up by fans, the team failed to remove the banner in a timely manner and must play their next home game in an empty stadium as punishment. Photo credit: japandailypress.com

The J-League has disciplined Japanese club Urawa Reds over racist fan behavior, ordering the popular team to play its next home game at an empty stadium.

Thursday's decision comes after a fan displayed a banner at Urawa's home stadium on Saturday that had the words "Japanese Only" written on it. The sign was put up at a stadium entrance but wasn't removed until after the March 8 game.

"These acts have had unexpected social repercussions both domestic and abroad," J-League chairman Mitsuru Murai said in a statement. "It is clear that they have damaged the brand of not just the J-League, but of the entire Japanese football community."

Urawa will play its next home game in front of 63,000 empty seats at Saitama Stadium on March 23. The punishment is the stiffest yet to be issued by the 20-year-old J-League.

Most teams in the J-League have several foreign players on their squads, but Urawa did not have a single foreigner in its lineup for Saturday's match which it lost 1-0. The team is coached by Serbia's Mihailo Petrovic.

Following Thursday's decision, the team announced it will prohibit supporters from displaying signs and banners of any kind at all home games.

In 2010, Urawa was fined $50,000 when some of its fans taunted foreign players of rival club Vegalta Sendai.

"Reds have had several incidents with their supporters in the past and the club has previously been sanctioned for racist behavior by their fans," Murai said.

Urawa is one of the best supported clubs in Japan and had average attendance of more than 37,000 last season.