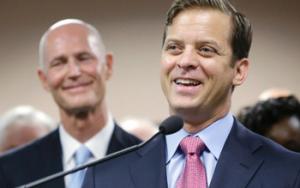 Florida Governor Rick Scott made history when he appointed the first Hispanic to the position of lieutenant governor. Scott is already in a potentially tough fight for re-election.

Ending a guessing game that stretched on for nearly 10 months, Scott named Miami-Dade Property Appraiser Carlos Lopez-Cantera to the post. Lopez-Cantera will also be Scott's running mate in the November elections. Lopez-Cantera, a Republican and an ally of U.S. Sen. Marco Rubio, called the appointment an "honor."

"It's just an opportunity that could not be ignored or denied because I'll be representing the entire state," Lopez-Cantera said.

The job of lieutenant governor is largely ceremonial, but Scott said he plans to use the 40-year-old former legislator to help push through his legislative agenda during the session that starts in March.

But more importantly, the selection of Lopez-Cantera brings both ethnic and geographical diversity to the Republican ticket in November. Lopez-Cantera was born in Madrid, Spain, but was raised in Miami. "He checks all the boxes for the governor," said Al Cardenas, former head of the Florida Republican Party and chairman of the American Conservative Union. "He's a young, Hispanic, talented office holder with a beautiful family, and a great record."

Scott brushed aside any talk that his selection would aid him politically in a race where polls have shown him trailing Democrat and former Gov. Charlie Crist. "I picked someone who is going to help get our state back to work," Scott said.

Lopez-Cantera downplayed his heritage, saying he didn't want to be defined by that, but joked that "there will be a little more Cuban coffee in the governor's office." The new lieutenant governor said Scott never mentioned needing his help in reaching the crucial Miami Hispanic demographic in the upcoming election. "We talked about policy issues," Lopez-Cantera said.

Top Republicans, including former Gov. Jeb Bush and Rubio, praised the choice. "Carlos is a great friend and a phenomenal choice to be Florida's lieutenant governor," said Rubio, whose wife attended the announcement. "I've known Carlos for three decades and have cherished his friendship and wise counsel."

Democrats, however, portrayed the selection of Lopez-Cantera as a cynical move to try to take away attention from Scott's support for policies such as his initial support for an Arizona-styled immigration law or last year's veto of a bill that would have allowed some young immigrants living in the U.S. illegally to apply for a temporary driver's license. The bill was passed overwhelmingly by the Republican-controlled Legislature.

"This is exactly the kind of pandering choice that has made Rick Scott one of the most unpopular governors in America," said Florida Democratic Party political director Christian Ulvert.

Lopez-Cantera will be sworn into his new job on Feb. 3. He takes the place of Jennifer Carroll who abruptly resigned in March 2012 after she was interviewed by law-enforcement authorities about work she once did for a charity that prosecutors have said was a front for a widespread gambling ring. She has not been accused of any wrongdoing and later said she was forced to resign by the Scott administration. 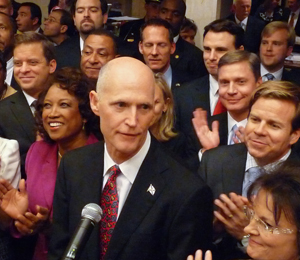 Scott is filling the spot of lieutenant governor a week after he was sued by a Tallahassee lobbyist and political activist for leaving the position vacant for so long. Barbara DeVane, who filed the suit with the Florida Supreme Court, contended Scott was breaking a state law that requires him to appoint a lieutenant governor.

The attorney for DeVane said Tuesday that the lawsuit will now be withdrawn. Don Hinkle said that the "inability" of Scott's lawyers to defend the vacancy "played a role in getting the governor to do his job.

Florida went nearly 100 years without the post of lieutenant governor until it was revived in 1968. The job, which pays nearly $125,000, has no real defined responsibilities besides replacing the governor if he leaves office or dies.

Over the last several months several names had emerged as possible contenders for the job, but Lopez-Cantera said the Scott administration did not reach out to him about the position until mid-December.

Financial disclosures show that Lopez-Cantera is worth more than $4 million and his assets include a $745,000 home in Miami as well as a townhome in Tallahassee and shares in family businesses.

Lopez-Cantera served eight years in the Florida Legislature, rising to the position of House Majority Leader from 2010 to 2012. He was elected property appraiser in 2012. During his time in the Legislature he pushed bills that dealt with property taxes and property assessments.

But Lopez-Cantera has also disagreed with Scott. When Scott criticized the level of education funding in the state budget in 2011, Lopez-Cantera called the governor's comments a "mischaracterization." He pointed out that legislators set aside more money for schools than Scott himself had recommended.

But Lopez-Cantera downplayed any past disagreements with Scott and said he shares the governor's position on items such as tax cuts and education. "No two people are going to be exactly the same on everything," Lopez-Cantera said. "We have the same vision in terms of where this state needs to go."

Scott credited what he called Lopez-Cantera's experience in cutting taxes and government regulations as some of the reasons he chose him. "You can't expect someone to agree with you 100 percent of the time," Scott said.

Michael Mishak contributed to this story from Miami.