Does Duck Dynasty Represent Much of Rural America? 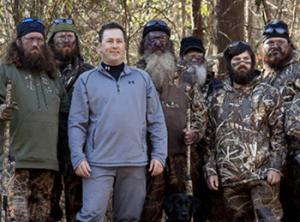 Does Duck Dynasty represent many of the views about blacks and gay that are held by rural America, or are those beliefs even broader? "Faith. Family. Ducks." It's the unofficial motto for the family featured in the TV reality show Duck Dynasty and that homespun philosophy permeates nearly everything in this small rural Louisiana town.

It's perhaps most on display at the White's Ferry Road Church of Christ in West Monroe, where the Robertson family prays and preaches most Sunday mornings.

The family - including patriarch Phil Robertson, who ignited a controversy last week when he told a magazine reporter that gays are sinners and African-Americans were happy under Jim Crow laws - were in a front pew this past Sunday. And standing by beliefs they say are deeply rooted in their reading of the Bible.

The rest of the flock, decked out in Duck Dynasty hats and bandannas, stood by the family and the sentiments Phil Robertson expressed. Alan, Robertson's eldest son, helped deliver a Christmas-themed sermon. He started off by referring to last week's controversy. "Hope your week went well," he dead-panned. "Ours was kinda' slow."

He was referring, of course, to the show's forced hiatus: TV network A&E suspended broadcasts last week after Phil's remarks about blacks and gays caused a public uproar.

But the controversy barely resonated above the organ music at White's Ferry Road Church. Son Willie - the CEO of the multimillion dollar Duck Commander duck call and decoy enterprise that inspired reality show producers to give the family a show - put on camouflage wader overalls and baptized three people, including one man with cancer.

"Who's going to be the lord of your life?" he asked, before dipping the man back into the baptismal pool at the front of the church.

To the people of West Monroe, this is the Robertson family: honest, family-focused and filled with the love of God and Jesus. It's the family that brought the spotlight to West Monroe, population 13,000, and in doing so put in sharp relief the cultural, political and religious differences that define - and often divide - America.

Folks here don't care that Phil Robertson told a GQ reporter that gays are sinners who are going to hell. Or that as a youth he picked cotton with African-Americans and never saw "the mistreatment of any black person. Not once." They do care that A&E suspended the show. The move, they say, was unfair and an affront to viewers, to the Robertsons and to Christians everywhere.

"The program and his comments take a snapshot and it doesn't represent the totality of what the guy is all about," said Richard Laban, the owner of Redneck Roots, a downtown West Monroe store that sells some 'Duck Dynasty' T-shirts and souvenirs. "A&E reacted entirely too quickly," added Laban. "They really treated Phil as if he was a terrorist." 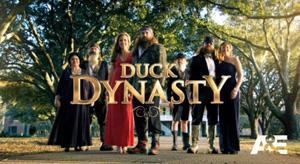 With its lakes and rolling hills and pine forests, West Monroe in northern Louisiana is Duck Country USA, a place where Robertson and his four sons built an empire on duck call devices and decoys before becoming wildly popular TV stars.

Politicians have taken a stand on the controversy - Sarah Palin posted a picture on her Facebook page of her with the reality show clan with the message, "Free Speech is an endangered species." Louisiana Gov. Bobby Jindal also lamented the suspension.

Even State Rep. Marcus Hunter - a Democrat and black man who represents West Monroe - issued a statement saying that "the faith and family structure exhibited by the Robertsons on the hit A&E show is part of the allure which makes it so special." Hunter did say he would like to "enlighten" Robertson about the "challenges and triumphs of black people during and after Jim Crow."

To be sure, not everyone here agrees with the Robertsons.

John Denison, a former Monroe TV personality who is gay and the head of Forum for Equality, a group that advocates for the equality of gay, lesbian, bisexual and transgender rights, said he's appalled by Robertson's remarks. "I want Phil Robertson and the world to know that what he said hurt me and many people here in our state," said Denison, who wrote an open letter to Robertson, asking him to dinner to discuss "not what separates us but what brings us together." Denison said Robertson's beliefs do not resonate with everyone in Louisiana. "I'm a Christian," said Denison. "No one wants to talk about my Christ, they only want to talk about their brand."

Rev. Welton Gaddy, who preaches at the Northminster Baptist Church in Monroe and is the president of a national group called the Interfaith Alliance, said it saddens him to think that people would assume all Louisiana residents think the same as Robertson about gays and African Americans. "There are some of us who are working hard every day for justice for everybody in this nation, for equality for everybody in this nation, and we don't appreciate people tearing that down," Gaddy said. "If Robertson wants to do that as an entertainer, go to it. But to do that in the name of religion crosses the line." 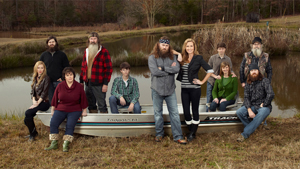 But like many people across America who enjoy the show, Robertson's fans here in West Monroe see something genuine about the reality TV family and believe he speaks his brand of the truth. Even though it's a program about a group of wealthy business owners who hunt and fish, people say it accurately reflects life here, as well as its Christian and American foundations.

When outsiders in New York or Hollywood make fun of the show - or worse, criticize Robertson for his beliefs - it's like part of the country is criticizing the essence of West Monroe. To the people here, it's just proof that a segment of America doesn't understand the rural, conservative, Christian part of this country. They - the Northerners, the liberals, the non-Christians - don't get us, people here think. Ironically, those Northerners are the ones who put West Monroe on the map in the first place by producing Duck Dynasty for TV.

Marilyn Lovett of West Monroe shrugs off the criticism. The "ducks," as she calls them, reflect her and her people. "Wholesome values," she said. "The fact that they pray after every dadgum meal. I just think it's wonderful. I wish there was more people like them." When asked about what people elsewhere in America thought when they read Robertson's comments in GQ, she shrugged. "I don't really care," she said. "They sure as hell don't care about what we think down here."

Duck Dynasty, which is one of the most-watched reality shows of all time, is naturally the area's biggest tourist draw. The Robertsons not only own a large gift store and warehouse where they sell everything from branded body wash to "Bearded Blend" coffee to a camouflage recliner, but they have opened Willie's Duck Diner and a women's boutique called Duck and Dressing.

There are self-guided tour maps, so fans can visit places seen on the show - the church, hardware store and doughnut shop are on the tour - and people say that West Monroe, and the Robertsons, are popular because it's all a throwback to small-town America. "I've known Phil for 30 years," said Mike Walsworth, the owner of the Gingerbread Shop, an antique and gift shop. "He hasn't changed for 30 years."

In the store's window, there's a miniature holiday village and model train in the window.

The tiny drive-in theater's movie marquee shows "It's a Wonderful Life," and, indeed, West Monroe could perhaps be mistaken for a smaller Bedford Falls - if reality hadn't come to town.

I think it is only acceptable that the Robertsons say what they want. This show is based on a family that is very religious. I am from a very small town and I can say that they show how most rural people are. I see nothing wrong with them saying their views when that is exactly what gays do. If that offended some people of the GLBT community, it should not because that is his lifestyle and maybe their lifestyle offends him. If A&E did not want things like that to be said then they should have found a different multimillion dollar family to film. They knew going into that contract that the family has its beliefs and that things like this might be said if pushed. I see nothing wrong with what he did or said he was just communicating his beliefs.