Race and Racism Pause for Mandela 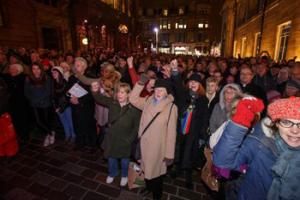 Race and racism paused for Mandela if only for a few days while South Africa and the world mourned his transition from the world stage into the annals of history, where his life, legacy and love for freedom will live forever.

Black and white, old and young, South Africans by the thousands paid final tribute to their beloved Nelson Mandela. In silence or murmuring, they filed past the coffin. Some glanced back, as if clinging to the sight, a moment in history.

One man raised his fist, the potent gesture of the struggle against white rule that Mandela led from prison. A woman fainted on the steps, and was helped into a wheelchair.

They had only a few seconds to look at the man many called "tata" - father in his native Xhosa - his face and upper body visible through a clear bubble atop the casket, dressed in a black-and-yellow shirt of the kind he favored as a statesman

"I wish I can say to him, 'Wake up and don't leave us,'" said Mary Kgobe, a 52-year-old teacher, after viewing the casket at the century-old Union Buildings, a sandstone government complex overlooking the capital, Pretoria, that was once the seat of white power.

Wearing the black, green and gold of the African National Congress, the ruling party Mandela once led, she was among the multitude who endured hours in the sun to say goodbye to the man they call their father, liberator and peacemaker.

Kgobe said losing Mandela, who died Dec. 5 at 95, was like losing a part of herself.

"This moment is really electrifying, knowing well what he did for us. I wish we could follow in his steps and be humble like he was," said Kgobe, whose grandfather, an ANC activist, was arrested several times. 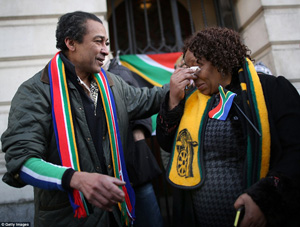 Long lines of mourners snaked through the capital for a glimpse of Mandela's body as it lay in state for three days - an image reminiscent of the miles-long queues of voters who waited patiently to cast their ballots during South Africa's first all-race elections in 1994 that saw Mandela become the country's first black president.

At a parking lot where buses ferried people to the viewing, the mood was cheerful. When a bus carrying supporters of the ANC made a wrong turn and drove away from the Union Buildings, one man joked: "Do they think we will steal the body?"

There was order and respect once they disembarked at the foot of steps leading to a marquee that sheltered Mandela's casket. Signs on the wall said no firearms were allowed. Some people shielded themselves from the sun with squares of cardboard plastered with large images of Mandela.

"Today was the first day and the last day I saw him. ... I had to see him for myself even if I couldn't speak with him," said Amos Mafolo, who works in logistics for the South African police. When his four children are older, Mafolo said, he will sit them down and tell them where he was on this day.

Silver Mogotlane opened his heart, saying he knew Mandela as a symbol and a historical figure, but still wondered in awe: "Who is this man?" "I'm lost. My mind is lost," he said after passing the casket.

Police officers stood nearby, one holding a box of tissues.

Mandela was lying in state in the same hilltop building where he made a stirring inaugural address that marked the birth of South Africa's democracy - an irony that was not lost on the throngs. "It's amazing to think that 19 years ago he was inaugurated there, and now he's lying there," said another viewer, Paul Letageng. "If he was not here, we would not have had peace in South Africa."

The mourners were joined by world leaders and Mandela family members, who walked silently past the casket at a special morning viewing, Mandela's widow, Graca Machel, and his former wife, Winnie Madikizela-Mandela, among them.

By the afternoon, long lines had formed, but the government said the cutoff point had been reached, urging people to arrive early on the following two days to get their chance. 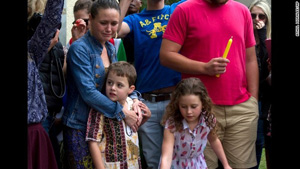 U2 frontman Bono also paid his respects, as did F.W. de Klerk, the last president of white rule who shared a Nobel Peace Prize with Mandela for ending apartheid. "I hope that his focus on lasting reconciliation will live and bloom in South Africa," de Klerk said.

The orderly proceedings were in contrast to a large-scale celebration Tuesday that went somewhat awry because of poor transport planning, faulty sound equipment and even an alleged impostor who, acting as an interpreter for the deaf, spouted nonsense rather than translating speeches by President Barack Obama and other statesmen.

The half-empty stands at that event led some to think the public had become apathetic, but the overwhelming response Wednesday showed South Africans' thirst for a simple way to say goodbye.

On Wednesday morning, police on motorcycles escorted a hearse bearing Mandela's flag-draped coffin from a military hospital outside Pretoria. Hundreds lined the streets, singing songs from the struggle against the apartheid regime and calling out farewells to Mandela.

Army helicopters circled overhead, but a sudden quiet fell over the amphitheater as the hearse arrived. Eight warrant officers representing the services and divisions of the South African military carried the casket, led by a military chaplain in a purple stole. The officers set down the coffin and removed the flag.

Mandela's body is to be flown Saturday to Qunu, his rural childhood village in Eastern Cape Province, where he will be buried Sunday.

Associated Press writers Gregory Katz and Jon Gambrell in Johannesburg and Ben Curtis in Pretoria contributed to this report.