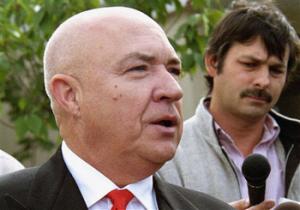 In this Sept. 5, 2000 photo, Tom Metzger, a former grand wizard of the Ku Klux Klan and founder of the White Aryan Resistance, is seen in Coeur d' Alene, Idaho. Jeff Schoep, the leader of a neo-Nazi group who traveled to Leith, N.D., in late September 2013 to support white supremacist, Craig Cobb, who is trying to take over the tiny North Dakota town says his group may help defend the man against felony terrorizing charges. Schoep's position contrasts with that of Metzger, who said Nov. 19, 2013, that he would return property in Leith that Cobb had deeded to him. Photo Credit: The Associated Press, Barbara Minton.

The leader of a neo-Nazi group who traveled to Leith in late September to support a white supremacist who is trying to take over the tiny North Dakota town says his group may help defend the man against felony terrorizing charges.

Jeff Schoep, commander of the National Socialist Movement, said he does not know all the details of a weekend incident that resulted in the arrest of Craig Cobb and a young supporter, but he will be reviewing videotape. "If we believe that they are 100 percent innocent and that they're being shafted by the system, that (authorities) are making things up and lying, definitely we'll do what we can to assist them," he said.

Schoep's position contrasts with that of Tom Metzger, another prominent white separatist, who said this week that he would return property in Leith that Cobb had deeded to him. Metzger, a former grand wizard of the Ku Klux Klan and founder of the White Aryan Resistance, said he made that decision before the arrests because he doesn't agree with Cobb's methods. And he said Schoep's visit to Leith eroded support for Cobb's mission. Schoep said he held the Leith town hall at Cobb's request to encourage "positive and productive dialogue." His appearance instead drew hundreds of opponents.

Cobb, 62, who is wanted in Canada for hate crime charges, moved to Leith about 1½ years ago. He bought 13 lots including a home, and began encouraging others with similar views to join him and build a voting majority in the community that at that point had just 23 residents. He has posted racial signs and white power flags on his property, and given some of it to other white power activists, including Metzger and Schoep. Schoep said he plans to keep his property, which includes a dilapidated creamery building, though he was not sure what he would do with it. Cobb also gave property to Alex Linder, founder of the anti-Semitic white supremacist website the Vanguard News Network. Linder did not respond to an AP request for comment. 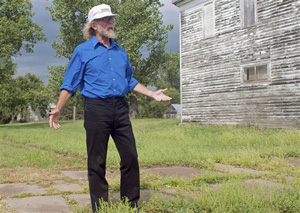 Cobb and Kynan Dutton, 29, are accused of terrorizing Leith with guns. They said they were patrolling the town last Saturday because of violence and harassment directed at them, including vandalism to their property. They have been jailed without bond. Cobb initially said he would represent himself against the charges that could land him in prison for up to 35 years; he has since been appointed public defenders.

Schoep said the men were threatened and have been the targets of vandals. "I think there's a little bit of one-sided justice going on there," he said.

Todd Schwarz, who is prosecuting Cobb, said the charges have nothing to do with Cobb's politics. "I don't care what his political beliefs are. What I care about is that he threatened people," said Schwarz, who identified himself as a gun rights advocate. "A responsible gun owner does not get into fights with people at gunpoint." Cobb and Dutton are due back in court Dec. 9 and could enter pleas then.

The FBI and the Bureau of Alcohol, Tobacco, Firearms and Explosives also are investigating the situation in Leith. FBI spokesman Kyle Loven said if any federal charges were to result, they would come through the U.S. attorney's office. U.S. Attorney Timothy Purdon declined comment.