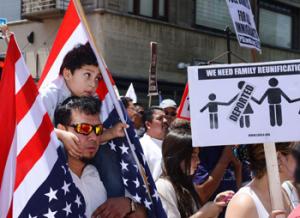 President Obama, along with some Republican leaders, had hoped that the growing political power of Hispanics would clear the way for an immigration overhaul law to be passed this year, a goal that has long eluded Washington. No sweeping immigration legislation has been passed since 1986.

President Barack Obama called on Congress on Thursday to finish work on an immigration overhaul by the end of the year, a goal that will be difficult to meet given the opposition of many Republicans in the House of Representatives.

While immigration remains one of Obama's top second-term priorities, the issue has been overshadowed for months, most recently by the 16-day partial government shutdown. The president's focus on immigration came as the White House was seeking to shift the conversation from the deeply problematic rollout of Obama's health care law.

During remarks at the White House, Obama insisted that Congress has the necessary time to finish an immigration bill by the end of the year. The Democratic-controlled-Senate passed sweeping legislation this summer that would provide an eventual path to citizenship for some 11 million immigrants living here illegally and would tighten border security. But the measure has languished in the Republican-led House.

"It doesn't get easier to put it off," Obama said.

Obama, along with some Republican leaders, had hoped that the growing political power of Hispanics would clear the way for an immigration overhaul, a goal that has long eluded Washington. No sweeping immigration legislation has been passed since 1986.

The White House was helped by comments this week from Republican House Speaker John Boehner, who said he was optimistic his chamber could act on immigration by year's end. But Boehner has long had trouble rallying support from the conservative wing of his party, and it's unclear whether he can get their support for the comprehensive bill Obama is seeking. 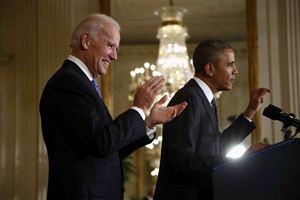 Most House Republicans have said they prefer a piece-by-piece approach to fixing the nation's fractured immigration system. Immediately following Obama's remarks, a spokesman said Boehner was opposed to "massive" legislation that no one understands. "The House is committed to a common sense, step-by-step approach that gives Americans confidence that reform is done the right way," spokesman Brendan Buck said.

Obama won an overwhelming majority of Hispanic voters in the 2012 presidential election, and some political analysts believe that the country's shifting demographics will make it difficult for Republicans to win the White House without boosting their appeal to the Latino community.

But most conservative Republicans oppose measures that would grant legal status to people already in the country illegally, even with the fines and long waiting period that would be imposed by the Senate measure.

The recent shutdown and debt ceiling fight also fueled deeper resentment toward Obama among those lawmakers, who got virtually nothing out of the deal that was reached to reopen the government and lift the borrowing limit.

Obama urged lawmakers to see immigration has an opportunity to show the public that government can work. "Rather than create problems, let's prove to the American people that Washington can actually solve some problems," Obama said.