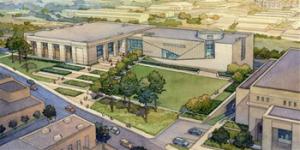 This is a 2013 artist's rendering provided by Hilferty & Associates, designers of the two new state museums-the Mississippi History Museum and the Mississippi Civil Rights Museum, side-by-side buildings, that are planned to be completed and open in 2017, in downtown Jackson, Miss. Officials say they did not set out to have separate-but-equal museums for the documentation of the state's history, but it could end up that way. Mississippi breaks ground Thursday. Oct. 24, 2013, on side-by-side museums that are expected to break ground of their own in how they depict the Southern state once rocked by racial turmoil. Photo Credit: The Associated Press, Rogelio V. Solis

Mississippi – once rocked by racial turmoil – breaks ground Thursday on side-by-side museums focused on the Southern state's history and culture. One promises a frank view of the civil rights momvement while the other takes in the sweep of history from pre-European settlements to Elvis Presley and more.

The Mississippi Civil Rights Museum and the Museum of Mississippi History – two museums under the same roof – are scheduled to open in Jackson in 2017, the state's bicentennial.

Hank Holmes, director of the state Department of Archives and History, said the exhibits won't minimize the parts of the past that some might consider embarrassing or uncomfortable.

"There is no sugar coating," Holmes said.

The two museums will have more than 200,000 square feet combined and are to be built not far from the Capitol in Jackson. The state has committed $40 million, and Holmes said officials are trying to raise $14 million in private donations.

The civil rights museum, focusing on 1945-70, will display the rifle that a white supremacist used in 1963 to kill Medgar Evers, the Mississippi NAACP leader whose slaying helped propel the struggle for equality to national attention. The rifle has been on temporary display the past few months at the state archives building, next door to the future museums' site, as part of an exhibit commemorating Evers' legacy and the 50th anniversary of his death. 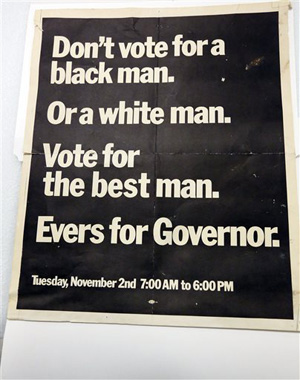 The civil rights museum will have a display about the 1955 slaying of Emmett Till, a 14-year-old African-American from Chicago who was said to have whistled at a white woman in a rural Mississippi grocery store. Till was kidnapped, badly beaten and shot in the head, and his body dumped in the Tallahatchie River. Till's mother allowed photos of his brutalized body to be published, galvanizing the fledgling civil rights movement.

The same museum will focus on the "Mississippi Burning" killings of civil rights workers Michael Schwerner, James Chaney and Andrew Goodman in Neshoba County in June 1964. And it will include exhibits devoted to people like Fannie Lou Hamer, who pushed for voting rights for all citizens in the 1960s and '70s.

Democratic state Sen. Hillman Frazier of Jackson was among the Legislative Black Caucus members who worked for years to bring a civil rights museum to fruition. He said the museums are a project that politicians, black and white, would have been reluctant to push a generation ago.

"For so many years, we were so ashamed of our history," Frazier said, speaking about Mississippians of all races.

The Mississippi Civil Rights Museum joins other facilities across the nation in addressing America's complex history of race relations. The National Civil Rights Museum opened in 1991 in Memphis, Tenn., at the Lorraine Motel, where the Rev. Martin Luther King Jr. was assassinated in 1968. In Alabama, the Birmingham Civil Rights Institute opened in 1992. And the National Museum of African American History and Culture is scheduled to open in 2015 in the nation's capital.

Like many Deep South states, Mississippi had segregated schools and public facilities until the 1960s and 1970s - facilities that people in power once falsely labeled "separate but equal." Holmes said African-Americans' stories will be integrated into both museums, not simply segregated into the civil rights segment.

The Museum of Mississippi History will include information on the Choctaw and Chickasaw Indian civilizations, which were thriving before European settlers arrived. It will recognize the diverse groups that shaped the state, including Chinese who settled in the Delta's agricultural flatlands. It also is to include exhibits on slavery, the Civil War and the Jim Crow era when laws imposed racial segregation in many public places in the U.S.

"We're very much trying to get away from the 'great white man's story,' which is how American history has been told," Holmes said.

The general history museum will even chronicle natural disasters, including the Mississippi River flood of 1927, Hurricane Camille in 1969 and Hurricane Katrina in 2005. It also will feature prominent Mississippians, including B.B. King, Elvis Presley and William Faulkner.

Holmes said the museums will tell history "with many stories."

The state used to have a small history museum inside a former state Capitol building in downtown Jackson. Then, officials at the Department of Archives and History officials began talking in 1998 about developing a larger and more detailed comprehensive museum.

Legislators later began working on a parallel plan to develop a museum that would focus on Mississippi's civil rights era - and that proposal got a boost when it was embraced in recent years by then-Gov. Haley Barbour, a Republican who at the time was considering a presidential run.

A study committee recommended putting the civil rights museum at Tougaloo College, a private and historically black school in Jackson that was a hub of activity in the civil rights era. Critics acknowledged Tougaloo's significance, but argued it would be difficult for tourists to find. They also opposed spending public money for a museum at a private institution.

In early 2011, when Barbour was laying the groundwork for a possible 2012 White House run, he used his state of the state speech to set the location in downtown Jackson.

"The civil rights struggle is an important part of our history, and millions of people are interested in learning more about it," Barbour said in the speech. "People from around the world would flock to see the museum and learn about the movement. ... I urge you to move this museum forward as an appropriate way to do justice to the civil rights movement and to stand as a monument of remembrance and reconciliation."

Starting in early 2012, Archives and History officials traveled Mississippi for months. In a series of public meetings, they solicited opinions about how the state's story should be told, focusing particularly on trying to find information from people who had lived through civil-rights struggles.

"Stories help connect us. They are how history has been shared and handed down for centuries," Evers-Williams and Cochran wrote. "They inspire us, teach us, and, sometimes, embarrass us. Mississippi, in many ways, provides America with a clear look into the mirror."