Environmental Conference Reaches Out to Minorities 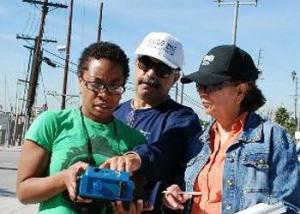 An environmental conference is reaching out to minorities. A recent report shows that minorities comprise 76 percent of the population in areas around the 12 most polluting coal-fired power plants in the United States. Photo Credit: ens.newswire.com

An upcoming conference on the environment is reaching out to minorities in an attempt to change the image of environmentalism as a mostly white and middle class concern.

The four-day conference organized by Power Shift, the Sierra Clubs and other groups starts Friday and focuses on addressing such problems as coal mining, hydraulic fracturing and climate change as well as discussions on racism, the climate movement and sexuality.

Phaedra Ellis-Lamkins, chief executive of Green For All, said the challenge for the environmental movement is to get minority and working class people to expect and demand both good jobs and clean air and water.

Ellis-Lamkins said the lack of diversity within the environmental movement is "shocking." She said it's important to note that "communities of color really have a strong environmental record, they just don't have a strong connection" to national groups.

"We just didn't call it environmentalism. We just did it to survive," she said of such practices as recycling.

Conference spokesman Whit Jones said the group doesn't ask attendees to list their race so a breakdown on those attending isn't available. But he estimated hundreds of students are coming from historically black colleges and universities.

There's little debate that minority communities suffer from excessive pollution. A 2012 report from the National Association for the Advancement of Colored People found that people of color were about 76 percent of the population in areas around the 12 most-polluting coal-fired power plants in the U.S.

Allison Chin, a past president of the Sierra Club, said environmentalists won't become a more diverse group "without us rolling up our sleeves." She said the Sierra Club has launched programs to provide environmental training, scholarships and even jobs to people from minority communities, as well as a Spanish language website.

That kind of outreach helped attract Erica Thames, a 23-year-old woman with a multi-racial background who now works for the Sierra Club.

"In the past, the environmental movement has been upper-middle class, white male. I'm really excited that it's getting more inclusive," said Thames, who's working on a project to bring rooftop solar panels to her heavily polluted, working-class community.

Thames said that at first community groups "didn't want anything to do with us" because they suspected an elitist underside to the environmental agenda. Then, she had to deal with practical questions.