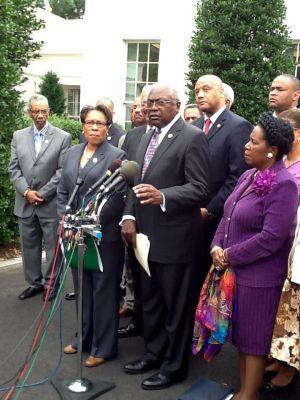 President Obama meets with the Congressional Black Caucus to discuss a plan for jobs and the importance of passing immigration reform. Photo Credit: bet.com

With unemployment in the black community roughly two times that of any other race, President Obama and the 43-member Congressional Black Caucus recently pledged to create a plan for job creation and economic growth within the African American community.

In their first face-to-face meeting in over two years, CBC members also pleaded with the president to implement more programs that target funds directly to minority communities for the express purpose of assuring greater job and educational opportunities.

Officially, unemployment in the black community registered at 13.7 Percent in June and has remained significantly higher than the general population's since the president took office in 2009. The rationale among CBC members is the greater allocation of funds for such infrastructure would go a long way in building up such communities and alleviating long lingering poverty rates.

"It can be education. It can be broadband deployment, it can be water, sewage development," Rep. Jim Clyburn said of the CBC's hopes of actually bringing an infrastructure bill to life. "Whatever you're doing to improve communities, make sure it gets to communities of need. It creates jobs dramatically. We put a formula in the rural development section of that called 10-20-30 to target funds into those areas … where 20% of the people have been stuck below the poverty level for the last 30 years."

In the wake of those discussions, the administration has unveiled a plan aimed at young people find jobs by publicizing job opportunities for low-income youth at the website: www.dol.gov/summerjobs.

We tried to put in place what the Supreme Court has asked us to do by restoring Section 4 of the Act and other ways to determine a formula, as opposed to doing by state," said Rep. and CBC Chair Marcia Fudge.

Civil Rights icon Rep. John Lewis recently told the Rev. Al Sharpton he believes congressional Democrats and Republicans will soon come together to restore the enactment, but with Congress being what it is these days what truly comes to be remains anyone's guest.

The conversation also discussed immigration reform, with members urging the president to advocate a fully comprehensive reform plan that includes solutions for immigrants from the Caribbean and Africa.

"The rise of communication has not only been open but will actually have broader and deeper discussions as a result of our meeting today, but we have been having conversations with the White House since I became chair," Fudge said.

"Certainly there are some obvious difference in how we think things should move forward and how the White House wants to move them forward, but we are on the same page," she added later.