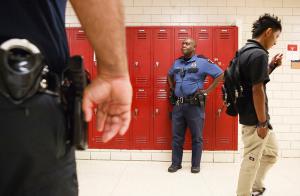 The ACLU of the Nation's Capital has filed a civil complaint for constitutional violations and assault and battery against a Washington, D.C., police officer on behalf of an elementary school student.

The action comes on the heels of a Texas complaint filed in February by the N.A.A.C.P. and Appleseed with the federal Education Department’s Office for Civil Rights against a Texas school district on behalf of black students who received four times the criminal misdemeanor citations than white students.

As U.S. schools and the White House consider plans for placing more police officers in
schools in the wake of the Newtown school shootings, red flags are being raised about a surge in criminal charges against kids at school for even minor misbehavior.

The Washington, D.C. student, "T.P," had been sent to the Moten Elementary School cafeteria last year for failing to participate in music class. The ACLU complaint alleges the assault occurred when Metropolitan Police Officer David Bailey grabbed the 10-year-old student by the back of his head, slammed it into the school cafeteria table and then picked him up by his shirt, threatened him with arrest. At the time, T.P. stood 4 feet 10 inches and weighed roughly 80 pounds. He was treated at a local emergency room.

Although Officer Bailey was not assigned to Moten Elementary at the time, regular visits from the local beat cops in D.C. public schools had become ubiquitous, according to the ACLU. Nevertheless, D.C. Police Department Chief Cathy Lanier said in a statement that "criminal charges were declined in this matter" against the officer, who is still on active duty. 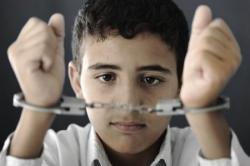 “This kind of force should never be used by a police officer against an unresisting child,” said Arthur Spitzer, Legal Director of the ACLU of the Nation’s Capital. “The fact that this took place in the boy’s school makes Officer Bailey’s actions even more outrageous.”

Moten Elementary serves indigent African American children in a community with staggering unemployment rates and children of color bear a disproportionate burden of unconstitutional police encounters in the educational context, according to the ACLU. ACLU sees the policies of “ushering black and brown students out of classrooms and into courtrooms” part of what they call the “School-to-Prison Pipeline.”

The February 20 Texas complaint alleges Bryan Independent School District
disproportionately ticketed black students for misdemeanors, accounting for 46 percent of tickets while only making up 21 percent of the student body. Texas chief Supreme Court justice Wallace B. Jefferson found the trend of issuing some 300,000 tickets in public schools each year disturbing, noting in a biennial address on the state of the
judiciary in March 2013 that "We are criminalizing our children for nonviolent offenses."

Nationwide, black and Hispanic students and those with disabilities are disproportionately issued citations or sent to court for relatively minor offenses, according to a January 2013 report from Advancement Project, Alliance for Educational Justice, Dignity in Schools Campaign and NAACP Legal Defense and Educational Fund.