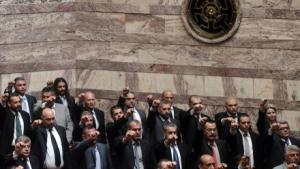 ATHENS, Greece (AP) - The Council of Europe's commissioner for human rights said Tuesday that Greece has the legal right to ban the far-right Golden Dawn party, the first time an international rights organization has raised the prospect of a ban.

Nils Muiznieks told The Associated Press in an interview that Greece must take tougher measures to combat a surge in racist violence that many link to the rise in popularity for the ultra-rightist group. The council describes Golden Dawn as a neo-Nazi party, while the group itself denies that it supports Hitler's ideology or violent actions.

Muiznieks said that Greece would be "fully within its rights under international human rights law" to ban the party from public office, but stopped short of saying that it should do so. The Council of Europe - a separate entity from the EU - runs the European Court of Human Rights, which enforces the rights code signed by the council's 47 member states.

The commissioner, who visited Greece from Jan. 28 to Feb. 1, said in a 32-page report published by the Strasbourg, France-based organization Tuesday that he was "seriously concerned" by the increase in hate crimes targeting immigrants in Greece.

The report describes Golden Dawn as a "neo-Nazi and violent political party" that should be isolated under legally binding international human rights conventions signed by Greece.

In a telephone interview, Muiznieks said that banning Golden Dawn "would be only part of the answer confronting the challenge."

"If you ban Golden Dawn," he said, "you would still have the problem of racist violence in Greece which is the broader issue."

Golden Dawn saw support for its party surge in general elections last June, as public support for traditionally dominant parties plummeted amid the country's massive financial crisis. It won a stunning 18 seats in the 300-seat Parliament, sending shockwaves across Europe. The party has repeatedly denied any direct involvement in the sharp rise in attacks over the last two years, mostly against south Asian immigrants in Greek cities. 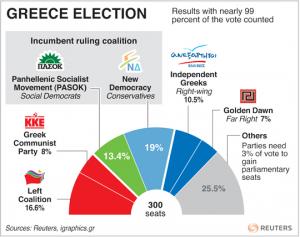 While denying it supports neo-Nazi ideology, Golden Dawn's leaders in the past have expressed admiration for Nazi leader Adolf Hitler.

Last summer, the party campaigned aggressively against illegal immigration, under the campaign slogan "let's rid the country of this stench." Greece has the highest rate of clandestine entry by migrants in the European Union.

Muiznieks welcomed recent police initiatives in Greece to combat hate crimes, as well as new legislation identifying a racial motive in violence as a punishable offense. But he said implementation of those regulations remained "woefully inadequate."

"The core problem is a lack of application," the commissioner said. He noted that a single prosecutor had been appointed to monitor hate crime in greater Athens, and police officers tasked to deal with the problem had only received two days of training.

Golden Dawn posted a link to the report on its website, describing the Council of Europe as a "Zionist institution."

"The brazen commissioner did not see and did not hear anything about the murders, rapes and robberies of our people by the barbarian hordes of Asia and Africa," a party statement said.