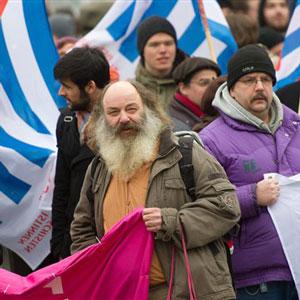 In this Feb. 13, 2013 file picture Lothar Koenig, center, takes part in a demonstration in Dresden, eastern Germany, to commemorate and remember the victims of the WWII aerial bombing. The German pastor is due to stand trial April 4, 2013 for allegedly orchestrating attacks on police at an anti-Nazi demonstration, says his conviction would send a chilling message to people opposed to right-wing extremists. Photo Credit: AP/dpa/Arno Burgi

BERLIN (AP) — A German pastor due to stand trial for allegedly inciting violence at an anti-Nazi demonstration said Tuesday that authorities risk deterring people from standing up to right-wing extremists if he is convicted.

Prosecutors accuse Lothar Koenig of serious breach of the peace, attempted obstruction of justice, and attempted coercion at a protest in the eastern city of Dresden two years ago.

Koenig, 59, allegedly used a van equipped with a loudspeaker to urge protesters to attack officers and later tried to drive a police vehicle off the road, Dresden prosecutor Lorenz Haase told The Associated Press.

Koenig, who faces several years in prison, denies the charges, saying he was part of a group trying peacefully to block thousands of neo-Nazis from commemorating German victims of Allied bombings in World War II.

"I've been working against violence for 22 years," he said in a telephone interview before the trial, which started Thursday. "If I'm convicted then the message will be, don't get involved, stay at home."

The trial has drawn widespread condemnation from anti-Nazi campaigners across Germany, with some, accusing authorities of spending more time going after protesters than cracking down on right-wing extremists.

Koenig claims police at the demonstration in Dresden on Feb. 19, 2011, were overwhelmed by the situation and lost control, resulting in violence, which he condemns.

The Lutheran pastor has a history of political activism stretching back to the days of socialist rule in East Germany, when he took part in protests against the repressive Soviet-backed regime.

After the Cold War ended, Koenig started a youth mission in Jena, a city where neo-Nazis became particularly active during the 1990s. Koenig tried to help youths who were being attacked by skinheads and with his outspoken style and long, bushy beard quickly became a fixture at anti-Nazi events.

These included protests against the annual right-wing march in Dresden around Feb. 13, the anniversary of the day when Allied bombers destroyed the historic city center in 1945 killing some 25,000 people.

"It's part of the myth of victimhood that the Nazis keep trying to promote, that the war was all the fault of the evil Americans and the evil British," Koenig said. "Whoever has eyes in Germany sees what the Nazis are really trying to do, but many Germans prefer to close their eyes because they'd rather not know."

Funny how this man gets persecuted for speaking out against bigotry (Nazis) but someone can straight up murder a transgender woman and people will get away with it.