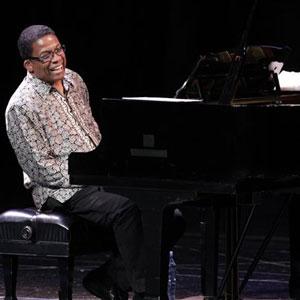 In this Jan. 16, 2013 photo, U.S. musician Herbie Hancock performs during a concert, as part of the 10th edition of the Panama Jazz Festival, in Panama City. Hancock, a UNESCO Goodwill Ambassador, is organizing a gala concert with jazz stars from around the world to be held on April 30 at the famed Hagia Irene in the outer courtyard of Topkapi Palace in Istanbul, which has been designated the host city for the second annual U.N.-sanctioned International Jazz Day. Photo Credit: AP/Arnulfo Franco

NEW YORK (AP) - Pianist Herbie Hancock will celebrate the special connection between Turkey and jazz music forged decades ago when the Turkish ambassador opened his residence to white and black musicians at a time when segregation held sway in the U.S. capital.

Hancock, a UNESCO Goodwill Ambassador, is organizing a gala concert with jazz stars from around the world on April 30 at the famed Hagia Irene in the outer courtyard of Topkapi Palace in Istanbul, which has been designated the host city for the second annual U.N.-sanctioned International Jazz Day.

"There's an amazing history of the relationship between Turkey and jazz," Hancock told The Associated Press in a telephone interview ahead of Tuesday's official announcement of the 2013 International Jazz Day program.

It began in the '30s and '40s when the two sons of Turkish Ambassador Mehmet Munir Ertegun pursued their passion for jazz by frequenting the capital's black neighborhoods to buy "race" records not available elsewhere, and attend concerts at the Howard Theater, a mecca for leading African-American entertainers.

Their father readily agreed when the brothers began inviting musicians to the ambassador's mansion for Sunday lunches followed by integrated jam sessions in an upstairs music parlor. The guests included jazz royalty from the Duke Ellington and Count Basie bands such as Lester Young, Benny Carter, Harry Carney, Johnny Hodges, and Rex Stewart.

Hancock says he was particularly impressed by a story told to him by Turkey's current ambassador, Namik Tan, about how his predecessor responded whenever outraged Southern senators would complain that "a person of color was seen entering your house by the front door (which) is not a practice to be encouraged."

The ambassador would offer a terse one-sentence reply such as: "In my home, friends enter by the front door - however we can arrange for you to enter from the back."

"That was fantastic ... that he always had the embassy open to jazz musicians," Hancock said. "Think about the state of civil rights and race relations at that time."

After the ambassador died in 1944, his sons remained in the U.S. Ahmet Ertegun founded Atlantic Records where he helped move African-American music into the mainstream of American pop culture, launching the careers of Ray Charles and Aretha Franklin, among others. His older brother, Nesuhi, headed the label's jazz department, producing significant recordings by jazz legends such as the Modern Jazz Quartet, John Coltrane, Charles Mingus and Ornette Coleman.

Tan acknowledged the tradition by launching the Ertegun Jazz Series of concerts at the Embassy Residence in 2011. He hopes that International Jazz Day will further spotlight the "unknown or even surprising" connection of Turkey with jazz. 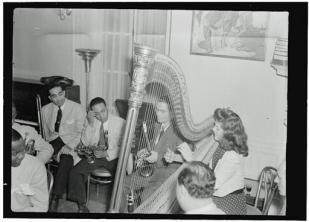 "International Jazz Day 2013 will provide a unique opportunity to pay tribute to the legacy of the Ertegun Brothers by bringing together artists from all around the world to celebrate jazz music's universal messages of peace, freedom and fraternity in the unique city of Istanbul where continents and civilizations meet," Tan said in an email.

The festivities conclude with an evening concert at Hagia Irene, known for its phenomenal acoustics, which is the city's oldest church dating back to the 4th century and now a museum. The concert will be streamed live and taped for broadcast on public television stations worldwide.

Tom Carter, president of the Thelonious Monk Institute of Jazz, says Istanbul is symbolically well suited to foster the goals of International Jazz Day because it bridges two continents.

"We look at jazz music as a means of bridging people together around the world," Carter said. "Turkey is a Muslim nation that has embraced democracy and is a very open society. That's very much what jazz represents - peace, harmony and democracy." 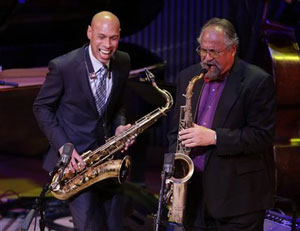 The Monk Institute is sponsoring the day's festivities along with the United Nations Educational, Scientific and Cultural Organization and the Istanbul Foundation for Culture & Arts.

Some 80 International Jazz Day events have already been confirmed in countries worldwide for April 30 - from an open-air concert in Yerevan, Armenia, to a program "Jazz Across Borders and Cultures" with workshops, jam sessions and concerts in Swaziland.

"This was a special occasion to share the music with the rest of the world and have it honored in a way that made everybody proud," said Hancock. "It accomplished what I believe to be a new vision of cultural diplomacy."