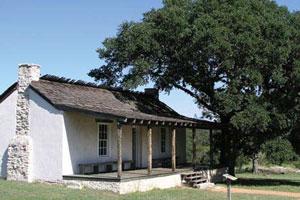 Called the Culinary Capital of Texas Hill Country, Fredericksburg, founded in the mid-1800s, draws not only its varieties of food, such as old German favorites like sausage and stuffed cabbage, but also its rich German heritage, unique shopping, and proximity to the Texas wine region. Step into this little German town and find an Old World experience coupled with architecture dating back to the arrival of the first German immigrants.

Notice too, the still proud history that is alive today in the town, for example, the city square is called Marktplatz, and hung on many shop doors the “wilkommen” sign welcomes one and all. Fredericksburg, named after Prince Friedrich of Prussia, was at one time was called Friedrichburg. On May 8, 1846, a man named Baron Ottfried Hans von Meusebach, (folks in Texas knew him by the name John O. Meusebach), founded the German town and named it the second main settlement in the area by the Society for the Protection of German Immigrants in Texas.

With a lot of bad luck, sickness, and a few close calls with the Native Americans living in the area, Fredericksburg thrived, even with the additional problems of proper land grants, and a lack of funds. Nevertheless, Fredericksburg was a town that worked, and the new settlers made the best of their situation by putting their ingenuity to work.

In 1848, the establishment of Fort Martin Scott created one of the first military outposts in Texas soon after the Civil War broke out, and it left many of these new German settlers in a bad situation because most were sympathetic to the Union. In fact, a Confederate group killed a number of Germans on their way to enlist in the Union army in 1862, called the “Massacre at Nueces.” 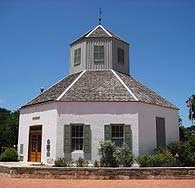 Cattle and agriculture eventually became the main commerce in Fredericksburg during the Civil War and beyond. Many of the landmarks from this time still stand in the town, and one distinctive piece of German heritage sits in the middle of town called the Vereinskirche or Society Church. It is octagonal in shape, and it was not only a building for various church congregations to worship, but also used for as a school, community hall, and fort as needed. These days, you can see an exact replica of the Vereinskirche in the middle of Main Street in the Marketplatz.

Another piece of Fredericksburg history that is distinct to the area is what they call the Sunday houses. In fact, almost nowhere else in Texas will you find a Sunday House. The Sunday House, as it were, turned out to be a place where the settlers would come into town on Saturday night to conduct their business, and attend church on Sunday. During the week, they lived on their acres of land further out in the country. The reason the settlers even owned both land in town, and farmland in the country was that originally everyone assumed that farmers would live in town all week, and only work their land during the day before coming home each evening. However, the newcomers to the area took on the American custom of country living by building homes on their farms where they spent most of their time. 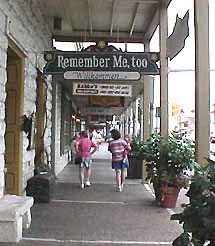 Today, history still thrives in Fredericksburg, you can even see several of the Sunday Houses still standing around the Main Street area, which includes the Pioneer Museum, and Fort Martin Scott; a frontier outpost. If you take a walk down any street in the town, you will find a number of German homes made of limestone and fachwerk.

There are as many as 700 structures still standing. The Sunday House is a link to an important part of Fredericksburg’s history, and Main Street is a nationally recognized historic district in the United States.

Cross Mountain is another piece of Fredericksburg history not to be forgotten, a landmark depicting the first German settlers to the area. The settlers found an already existing wooden cross more than likely left behind by Spanish missionaries, and erected it, which is another piece of history that still stands today.

There are also two historic cemeteries in Fredericksburg on each end of town east and west, Der Stadt Friedhof, and Catholic Cemetery, both of which offer a look at the granite markers and headstones from an earlier time, many German.

Located in the Texas Hill Country’s Gillespie County, Fredericksburg sits at about 1700-feet above sea level with a diversity of trees, hills, rivers, and grazing pastures that offer an experience for any type of traveler to the area. Whether it is history, culture, or just a chance to partake in some of the best Texas wines around, this little German town is a jewel that will not soon be forgotten.

Understanding that life would not be good if they continued to have conflict with the local Comanches, the German pioneers made a peace treaty that basically held. Germans felt it worked better than the Comanches, but it was a markedly different approach from the rest of the country. The German gave the natives gifts in exchange for peace. The treaty is celebrated every year locally.