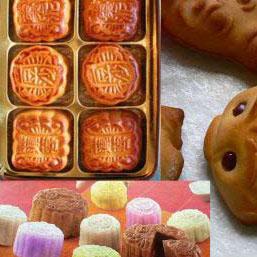 Chinese people all over the world celebrated the joyous Mid-Autumn Festival in September, also known as the Moon Festival. The festival occurs during a time of the full moon, and is a time to settle debts, and enjoy the riches of the harvest. The Mid-Autumn Festival, traditionally celebrated on the fifteenth day of the eighth moon of the lunar calendar, around the time of the autumn equinox, which occurred this year in mid- to late September.

The full moon symbolizes reunion, so the festival is a time for friends and families to gather. Offerings of apples, pears, peaches, grapes, pomegranates, melons, oranges, and pomelos were traditionally placed on altars in courtyards to celebrate the harvest. Thirteen moon cakes stacked in a pyramid represent the thirteen moons of a complete year. Moon cakes are three-inch pastries, stuffed with a paste made from melon seeds, lotus seeds, almonds, minced meats, bean paste, orange peels, and lard, then covered with a reddish brown crust, and decorated with festival symbols. Sometimes, embedded in the center is a salted duck egg yolk that represents the full moon.

Moon cakes became emblematic of the Mid-Autumn Festival during the Yuan Dynasty, (1280-1368 AD), when rebel leaders from the previous Sung Dynasty, (960-1280 AD), planned a rebellion to oust their Mongolian rulers. To spread the word secretly, they took advantage of the upcoming Moon Festival by hiding plans about the upcoming attack in the moon cakes.

During the Moon Festival, the rebels successfully carried out their attack and overthrew the government, eventually establishing the Ming Dynasty (1368-1644 AD). Today, moon cakes of many varieties commemorate this tale. 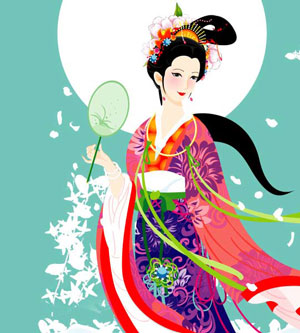 There are many variations, some conflicting, of the most popular Moon Festival legend involving Chang E, a charming young woman who becomes immortal and ascends to the moon.

One version is that long ago, 10 suns burned in the sky, scorching the earth. The King of Heaven sent down archer Hou Yi, who shot down nine suns and restored the earth to life. Chang E met Hou Yi, and realizing he was the earth’s savior, fell in love with him and they married. To ensure that their love lasted, Hou Yi got the elixir of immortality from the Western Queen Mother who instructed them to drink it together to share eternal life. They planned to drink it on the fifteenth day of the eighth moon, but as the moon rose, the wicked Feng Meng, who wanted the elixir for himself, murdered Hou Yi. Rather than give it to him, Chang E drank the elixir and ascended to heaven, becoming an immortal goddess.