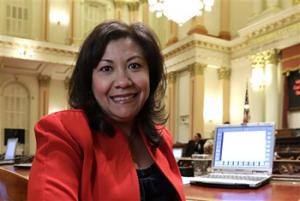 In this Aug. 28, 2014 file photo, California state Sen. Norma Torres, D-Pomona, poses in the Senate Chambers at the Capitol in Sacramento. Torres, a first-time candidate for Congress, tells voters there is no more critical time to vote than now _ even as she accepts that “great disillusion” might prompt many Hispanic voters to sit this non-presidential midterm election out. Photo Credit: The Associated Press, Rich Pedroncelli, File.

Hispanics are being urged to vote in the November Mid-Term elections next week to send a clear message to Washington that this large minority group cannot be ignored.

First-time congressional candidate Norma Torres tells people in her Los Angeles-area district that there is no more critical time to vote than now, even as she acknowledges "great disillusion" may cause many Hispanics to sit out Election Day.

"There's nothing sexy on the ballot, no ballot measure to mobilize people" said Torres. And no presidential contest this year.

She and fellow Democrat Christina Gagnier are in a race to succeed Democratic Rep. Gloria Negrete McLeod, who is quitting Capitol Hill after just one term and trying to win election to a county board of supervisors.

"My message is that now it's more important than ever that we vote to send a clear message to Washington that we are a big group of voters and they should pay attention to us," Torres said.

Torres is among nine first-time Hispanic candidates for the House. One of them Democrat Raul Garcia, is running as a write-in candidate against Majority Leader Kevin McCarthy of California, the House's No. 2 Republican.

Elections in nonpresidential years typically draw fewer voters. How Hispanics respond in Tuesday's balloting could offer clues to the long-term political consequences of inaction on immigration policy and on increased deportations, issues that have dismayed Hispanics.

House Republicans refused to take up comprehensive immigration legislation that passed by a strong bipartisan vote in the Democratic-controlled Senate in June 2013. That bill would have granted a path to citizenship for immigrants living illegally in the U.S., tightened border security and expanded the number of visas for highly skilled workers.

First-time Republican candidate Carlos Curbelo, a son of Cuban exiles who is trying to unseat Democratic Rep. Joe Garcia of Florida, blames both parties for the failure on immigration. There is "deep disappointment" about it among Hispanic voters, Curbelo said, but "sometimes disappointment can encourage people to go and vote." 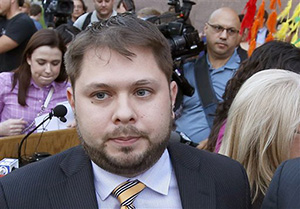 "I fear there will be a lack of participation, but my job is to try to fight that," said Ruben Gallego, a Democrat who is seeking Arizona's 7th Congressional District seat.

The National Association of Latino Elected and Appointed Officials predicted that almost 8 million of the nearly 25 million eligible Hispanic voters would go to the polls in November, compared with 6.6 million in the 2010 midterms.

Pete Aguilar, a Democrat running for an open California seat against Republican Paul Chabot, says Democrats could be hurt if Latino voters stay home. "We will make an effort so that all members of our community will go out and vote," Aguilar said.

Other first-time Hispanic Democrats are Amanda Renteria, daughter of Mexican day laborers who is running against Republican David Valadao for California's 21st District, and Roxanne "Rocky" Lara, who is trying to unseat Rep. Steve Pearce, a five-term Republican from New Mexico.

The GOP's first-timers were among 45 participants in its "Young Guns" program, which helped the GOP take 63 seats in 2010.

They include Alex Mooney, also the son of a Cuban exile. Mooney moved from Maryland to West Virginia, where he faces former state Democratic Party Chairman Nick Casey in the 2nd Congressional District.

Pedro Celis, who is trying to unseat Rep. Suzan DelBene, D-Wash., thinks his Mexican origin might help him win.

"I'm American by choice," said Celis, who is from Monterrey, Mexico, and became a U.S. citizen in 1993. "I came here as an adult, I wasn't brought by my parents. As far as I know, there's nobody with my background in Congress."

Marilinda Garcia, who is challenging Rep. Annie Kuster, D-N.H., said Hispanic voters ask her about the Senate-passed immigration bill. "I am against amnesty, but giving legal status is a different thing, and there are different possible solutions," Garcia said.

Overall, there are 32 Hispanic members of Congress seeking re-election: 25 Democrats and seven Republicans.

Voting is a right and a privilege to be heard. If you feel the need for change in this country then every single person you know who feels like you do should be voting with you. Our country is a mess, and we need for some things to change, unless we all take the time to get educated and vote we have NO right to complain in the end. You are either a part of the solution or part of the problem.
Take the time. Isn't your life, and your families futures worth it????? You can go on line and get a practice ballot go through all the issues. It's easy, take it with you and do your part. Like Torres said in this article."My message is that now it's more important than ever that we vote to send a clear message to Washington that we are a big group of voters and they should pay attention to us," I think that's all of us. - See more at: http://www.usaonrace.com/common-ties-that-bind-race-relations/4964/hispa...

Voting adds towards being a good citizen. Active participation in processes of deliberation and decision-making ensures that individuals are citizens, not subjects. Doesn't have to be a selective group for instance the minorities. Citizenship and voting means being protected by the law rather than participating in its formulation or execution. It became important but occasional an identity, a legal status rather than a fact of everyday life.