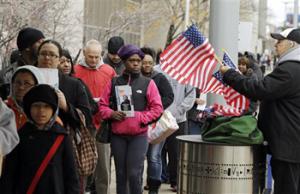 In this Nov. 5, 2012, file photo, voters wait in line outside the Cuyahoga County Board of Elections in Cleveland on the final day of early voting. Early voting won't be starting in Ohio on Tuesday, Sept. 30, 2014, following an order from a divided U.S. Supreme Court that delayed it until next week. Photo Credit: The Associated Press, Mark Duncan, File.

Early voting delay in Ohio will hurt both Democrats and Republican alike, especially those in highly contested races. A delay in Ohio's early voting schedule appears to be felt most felt by candidates with political futures at stake and their constituents eager to cast their ballots as soon as possible.

Democratic gubernatorial contender Ed FitzGerald and his running mate planned to vote early Tuesday and encourage others to do the same. But his campaign canceled the plans after an order from a divided U.S. Supreme Court put off the start of early voting in the swing state by a week.

In their 5-4 vote, the justices on Monday granted a request from Ohio officials to delay a judge's ruling that had lengthened the state's early voting schedule and had moved early voting to Tuesday for the November election.

Voting will now start Oct. 7. Ohioans can vote absentee by mail or in person ahead of Election Day.

The high court's order came as Gov. John Kasich and other prominent Ohio Republicans sought a campaign boost from New Jersey Gov. Chris Christie at a get-out-the-vote rally in suburban Cleveland. The gathering took place Monday in suburban Independence, the political backyard of FitzGerald, who is the Cuyahoga County executive.

Just how disruptive the schedule delay is remains to be seen.

At least four people arrived Tuesday morning to vote at the Franklin County Board of Elections site in Columbus, while three others called to complain about the court ruling, said board spokesman Ben Piscitelli.

In Hamilton County, home to Cincinnati, an elections official said no one showed up in the morning to cast an early ballot. And several county boards reported the same. 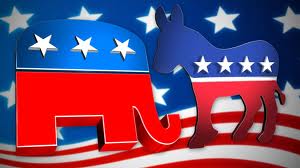 Elections officials in Lucas County, which includes Toledo, put up signs at their voting center notifying voters about the change in hours.

"We stayed late last night, posted the new hours and took down all the old hours," said Gina Kaczala, director of the Lucas County Board of Elections.

His schedule scraps evening hours and an additional Sunday required by U.S. District Judge Peter Economus' decision. Ohioans will have two Saturdays and the Sunday before the Nov. 4 election to cast an early ballot.

The American Civil Liberties Union of Ohio brought the lawsuit in May on behalf of several black churches and the state's chapters of the NAACP and the League of Women Voters.

The groups are challenging a directive from Husted that set uniform early voting times and restricted weekend and evening hours. The plaintiffs also want to overturn a GOP-backed state law eliminating so-called golden week, a time when people could both register to vote and cast ballots. Without those days, early voting would typically start 28 or 29 days before Election Day, instead of the previous 35-day window.

The plaintiffs claim the new rules will make it difficult for residents to vote and disproportionately affect low-income and black voters, who, the groups say, are more likely to use the weekend and evening hours to vote early in elections.

The state contends Ohio offers more opportunities to vote early than most states.