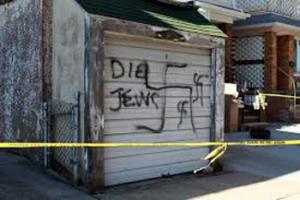 As hate crimes increase against Jewish people, they vary from anti-Semitic statements circulation of fliers with swastikas, to assaults and vandalism. Photo Credit: pamelageller.com

Jews and Muslims are becoming victims of hate crimes more and more. Suspected hate crimes against Jewish and Muslim people have increased in New York City following unrest overseas this summer, but the attacks are random and not from any organized group, police officials said Wednesday.

Deputy Chief Michael Osgood, who heads the special victims division, said there's been an increase since July 1, when reports about the unrest in Gaza and the Islamic State group became front-page news.

The crimes vary from anti-Semitic statements to assaults and vandalism. They include a 55-year-old New York man accused of mowing down a Sikh man with his pickup truck after calling him a terrorist and a series of fliers with swastikas that were found in Brooklyn, home to the largest concentration of Orthodox Jews outside Israel. 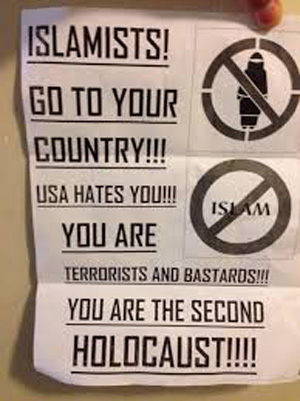 Osgood said at a briefing ahead of the upcoming holy days that the sustained media attention about overseas conflicts creates "an emotional surge" in New York.

The incidents are not from any organized group, Osgood said. They are random and impulsive acts by "street thugs," he said.

Police Commissioner William Bratton said the authorities were watching very closely and aggressively. He said it was important to note that the crimes are not an organized effort to strike a particular religious group or race.